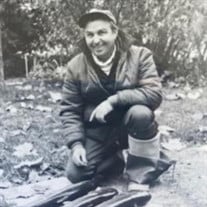 On Thursday, the 22nd of April at home on the Bridgeport Bar, between Brewster and Bridgeport Howard passed from this life to wherein his life already was, hidden with God in Christ. His death was as peaceful as one could hope for it to come, with his sons ‘round about him in convivial conversation and reminiscence, Scriptures read and prayer, and even a chapter read from Farmer Boy, a classroom scene. He was born in Omak, Washington, on October 18, 1925 on a Sunday to parents, Stanley Edgar (LaCourse) Picard and Agnes Genevieve (Potvin) Picard. Already born into the family were sister Delores and brother Richard, Howard being followed by brother Donald and sister BeverIy (“Bebidy”). All his family predeceased him. In 1929 the family moved to Tahollah from necessity, returning to Omak in 1932. He entered first grade in Tahollah in 1931 being the first in his class to be able to count to one hundred. Also while there, aged 4 or 5, he was misled by another boy to ship out across the little harbor in a dinghy only to be swept to sea by the Quinault River. Out there for hours they were finally rescued by his father, the only one brave enough to attempt the rescue. Upon returning to Omak/Okanogan area he was entered into the second grade at the Virginia Grainger School for a few months and thence to East Omak Elementary, and the Stevens School. He graduated from Omak High School in 1943 aged 17. That summer in August he enlisted in the U.S. Navy Air Force training at Farragut, Idaho. He then went to gunnery and radio school in Florida checking out as a rear gunner in an SBD Dauntless Dive-Bomber. Eventually he shipped out for Hawaii and the Pacific Theater where he was an aircrew member in a Martin Mariner, flying combat missions on anti-submarine patrol at the end of the Philippines invasion and after the war flying mail service from Shanghai to Hong Kong. Honorably discharged from the Navy the fall of 1946 he enrolled in January, 1947 in classes at Eastern Washington College of Education. There he matriculated with friends from Omak and Brewster including Rodger Webster, Bill Palmer and Howard Gamble. He completed student teaching during the winter of 1949-50 at the Virginia Grainger School. Howard batched with various buddies and his brother Donald in Omak while working at Biles Coleman tailing a saw and playing baseball with Omak’s town team winning the County Championship in 1952. With encouragement from Webster and Palmer, he went down to Brewster to teach and coach in the fall of 1952. There, while, working as a laborer on Chief Joseph Dam in the summer of 1953, he played third base with Brewster’s town team and they won the Okanogan County Championship. Danny Gebbers of Brewster later remarked that baseball abilities were professional quality. That same summer of 1953, his wife to be was widowed with three children: Jack (deceased 1983), Ron, and Darrell Hauswirth. In 1954 he met Cora Evelyn “Toots” (Lull) Hauswirth requesting her as “room mother” to his sixth grade class which class Jack was entering. Ronnie as a first grader played match-maker. They were married at the house on the Bridgeport Bar on August 28, 1955 with Pastor Ray Glessner officiating. He has lived there since that day. Their son, Howie was born in October of 1958. In 1958 he began teaching seventh grade and then in 1968 began as the first School Counselor at Brewster School retiring in 1985. While counselor he also taught one period of either eighth grade English or an elementary P.E. class. He also coached high school baseball as head, assistant in football and basketball. He also then refereed football and basket ball throughout the 1960s. Every day, Evelyn sent him to his work well fed and in a clean white shirt and tie. He and the entire family played golf at Lake Woods Golf Course where in 1973 and 1977 he and “Toots” managed the course from tees to greens, fairway to clubhouse and truly advanced its posture as a family golf course. He had at least 4 holes-in-one and 1 or 2 Club Championships to boast. Mainly, he and Evelyn raised a family at home, in church and on the golf course and baseball diamond with great effort and faithfulness. Quoted in QCH June 27,1985, “Being married to the person I was married to was a fortunate thing. She has really taken care of all the needs.” He faithfully provided all for that to happen; his bedrock faith in Christ foundational to all. Services will be at Barnes Chapel in Brewster at 11 a.m. on April 29, 2022 and interment at Bridgeport Cemetery.

On Thursday, the 22nd of April at home on the Bridgeport Bar, between Brewster and Bridgeport Howard passed from this life to wherein his life already was, hidden with God in Christ. His death was as peaceful as one could hope for it to come,... View Obituary & Service Information

The family of Howard Picard created this Life Tributes page to make it easy to share your memories.

On Thursday, the 22nd of April at home on the Bridgeport Bar,...