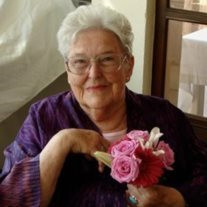 Hazel Lucile Higgins of Chelan passed away on March 15, 2014 at Lake Chelan Community Hospital after a good life of 97 years. She was born in Garfield, Kansas on July 14, 1916, the only child of C.O. “Oscar” and Mamie (Raines) Nichols. Hazel’s family moved from Kansas to Montana when she was very young. After a winter of being snow bound in a small cabin near Ennis, Montana and her father losing his cattle herd to disease, the family moved to Chelan when Hazel was 3. Her father worked in the construction business with her Uncle. In the winters when she was young, her parents travelled to the San Diego area near her Grandmother Martin’s home so her Dad could find construction work. Hazel attended school in Chelan and graduated from the Chelan High School in 1935. For a short time she attended Washington State College majoring in clothing design and tailoring. On April 14, 1938 she was married to Lyle B. Higgins also from Chelan. Lyle and Hazel made their home in Chelan, with the exception of the time spent in Seattle while Lyle attended Law School at the University of Washington. Hazel helped put Lyle through law school by catering parties. They built a home on Emerson Street where they lived for 45 years and raised their 4 children. Oldest son James was born after they had returned to Chelan and Lyle had begun his law practice. Second was daughter Kathleen (Kay) who was born two days after Lyle left to serve in the Navy in World War II. Son Ben was born after the war and was 9 months old when they moved into the house on Emerson Street. Daughter Toni was born 10 years later right after Hazel had turned 40. While her children were young she sewed a lot of their clothes, sometimes even making the pattern herself. Hazel had a love for all things growing which she had learned from her parents Oscar and Mamie. The yard at their home showed this love as many of the trees and plants in it had been grown from seed, been propagated from a larger plant or transplanted there as a seedling. She not only knew the common name of all the plants but often also knew the scientific name too. She generously shared many of her plants with neighbors and friends. Another favorite hobby was reading. Hazel literally read thousands of books and after reading them often gave them to family and friends or donated them to the library. She also enjoyed knitting and crocheting and if she wasn’t reading she passed the time crocheting a new afghan or knitting one of the many pairs of slippers that she made for her grandchildren. There was a part of her life that she spent as caregiver, to her parents during their later years and at the same time to her husband Lyle. She and Lyle had been married almost 56 years when he passed away in 1994. Hazel also loved a good adventure. She enjoyed driving to Seattle for shopping trips. Hazel and Lyle took several trips to Canada to attend Rotary conventions. They travelled to Mazatlán, Mexico and they also vacationed in California and Hawaii with friends. Hazel and Grandson Geoff Huffer took a road trip from Washington to San Antonio, Texas that lasted eight weeks. Along with good friend Venus Pfafman, she enjoyed a two month cruise of the South Pacific to Australia and New Zealand. She attended weddings of her grandchildren throughout Washington and even went to Isla Mujeres, Mexico at the age of 90. Hazel was a past member of the Lake Chelan Garden Club, Lake Chelan Hospital Guild Z and the Lake Chelan Golf Club-Ladies Division. Hazel’s mind stayed clear throughout the years and she lived by herself until she fell last September. Even after her fall, with quiet determination, she kept trying to improve her movement by continuing her physical therapy and speech therapy at Regency Manor. She will always be an inspiration to all of us. Hazel was preceded in death by her husband Lyle Higgins and her parents Oscar and Mamie Nichols. She is survived by her 4 children and their families: Son James Higgins (Suzanne) of Kent, WA; granddaughter Rebecca Riddle (Timothy) great-granddaughter Meghan; granddaughter Deborah Molnar (Peter) great-granddaughter Eva; Daughter Kathleen Frymier (Buck) of Gig Harbor, WA; grandson Kit Frymier; granddaughter Bethany Berger (Brad) great-grandsons Braxton & Bennett, step great-granddaughters Molly & Sarah; granddaughter Michele Griffin (Matt) great-granddaughters Estella & Amelia; granddaughter Jami Walker (Tim) great-granddaughters Alexis & Maddison; granddaughter Kristy Sewrey (Andy) great-granddaughter Taylor; granddaughter Annmarie Frymier; Son Ben Higgins (Jo Ann) of Chelan, WA; grandson Jonathan Higgins (Olivia Moug) great-grandsons Tyler & Miles; granddaughter Jenifer Rainville (Rob) great-granddaughter Kaitlyn & great-grandson Ryan; granddaughter Laura Clinton (John) great-grandson Carson & great-granddaughter Hallie Jo; grandson Pat Madden (Lani) great-grandsons Cole and Aaron & step great-granddaughter Aislinn Pai & step great-grandson Alika Pai; Daughter Toni Berry (Ronald) of Chelan, WA; grandson Geoffrey Huffer (Nina) great-granddaughters Charli & Chloe; granddaughter Margaret Huffer (Rick Linn) step great-grandson Kody & step great-granddaughter Avery ; step granddaughter Lisa Sloan. Also her caregiver and special friend Martha Williams. In lieu of flowers the family suggests donations to the Chelan Public Library. Services for Hazel Higgins will be held on Saturday, April 5, 2014 at 11:00am at Precht Rose Chapel in Chelan.

The family of Hazel Lucile Higgins created this Life Tributes page to make it easy to share your memories.