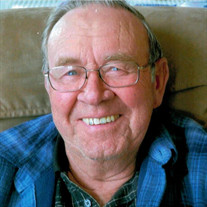 Hartley “Swede” Blankenship, of Chelan passed away Wednesday, August 2, 2017 peacefully at home with his family. Swede was born to William (Noah) Blankenship and Gretta Workman on September 18, 1928 in Chehalis, WA. He attended school and graduated from Mossyrock High School. Swede was proud to have served in the Marine Corps during WWII and the Korean War. He worked on the second Narrows Bridge and did road construction for Goodfellow Brothers. He retired as permanent staff with Douglas County PUD at Wells Dam. Swede was a man of few words and when he talked, you listened. He enjoyed sharing his knowledge with those who wanted to learn, whether it be canning, gardening, or waterskiing. He was an avid gardener! Swede loved his dahlias. In his personal directions on planting them, he made a note that a happy dahlia is one that is talked to! His garden had a wonderful bounty of various fruits and vegetables. He kept everyone he knew well stocked with fresh produce. He enjoyed fishing, hunting and cooking. Swede loved to prepare a menu for those visiting. No one ever left hungry and never without dessert! Swede was very involved in fraternal organizations. He was a 33rd degree Mason, active in Chelan Valley Lodge, the El Katif Shriners, Eastern Star, Amaranth and the Chelan Senior Center. Swede married Dayle Fletcher in 1946 and had two children, Lee and Jana. He was married to Betty Lou Gardner until her passing in 2005. In August 2006, he married Barbara Rist. It was said that whenever Swede and Barb were together, they’d be no more than ten feet apart and it was obvious of the love they shared. Swede is survived by his wife Barbara, son Lee Blankenship (Cheryl), Jana Birk; step children Steve Gardner, Ann Litt (Jason) and Julie Rist; nine grandchildren, nine great grandchildren and one great great grandson. He was preceded in death by his parents; brothers Harry, Freeman, Arnold and Delman and step son Scott Gardner. Celebration of life will be held at the Lake Chelan Methodist Church (206 N Emerson St) on Saturday, August 12, 2017 at 1pm followed by a friendly gathering at the Chelan Senior Center (534 E. Trow St). Memorial donations in memory of Swede can be made to: The College Scholarship Fund - Silver Star Chapter 93, c/o Order of Eastern Star, 607 Minor Place, E. Wenatchee WA 98802.

Hartley &#8220;Swede&#8221; Blankenship, of Chelan passed away Wednesday, August 2, 2017 peacefully at home with his family. Swede was born to William (Noah) Blankenship and Gretta Workman on September 18, 1928 in Chehalis, WA. He attended... View Obituary & Service Information

The family of Hartley Lee "Swede" Blankenship created this Life Tributes page to make it easy to share your memories.