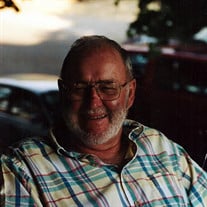 Harold L. (John) Snyder, was born May 6th, 1929 in Lakeside, WA to Joseph and Frances (Bieber) Snyder. He was the youngest of 12 siblings. He attended the Lakeside Primary School and then attended Chelan Junior and Senior High School, graduating in 1947. He continued his education at Washington State University. John married Joyce Beckman on December 6th, 1947. To this marriage were born four children, Robert, Susie, Joe and Richard. He was preceded in death by his parents, all his siblings, his oldest son, Robert, and many nieces and nephews. He is survived by his wife of 67 years, his daughter Susie (Cindy), and his sons, Joe (Mary) and Richard (Leslie) Snyder, four grandsons, one granddaughter, and 12 great grandchildren. He started work at Wenoka Fruit Storage, followed by work for the Lake Chelan Boat Company for many years. He then worked for the local Washington State Liquor Store followed by work at the Chelan District office of the Chelan County PUD, starting as a meter reader and retiring as the local manager. John was a longtime volunteer fireman, becoming Chief in the later years, with the new fire hall named in his honor. He was an avid collector of many treasures and an avid skeet shooter, taking his grandson Russell from novice to Sub Junior Washington State champion two years in a row. John was instrumental in many people’s lives, with a nickname for most. John is remembered fondly by his children, grandchildren, nieces, nephews and a multitude of friends for his love, sense of humor, chats on the porch, and hugs. Throughout his life John maintained a very large place in his heart for children and animals. He touched many lives and continued to be a loving and caring soul until his last days. He will be missed by all. In lieu of flowers, memorials may be made to the North Cascades Sportsman’s Club, Chelan Fire & Rescue or charity of your choice. The family would like to thank Dr. Waszkewitz, Catherine Freeman, and the loving care from staff at Regency Manor, Chelan. There will be an intimate memorial on Saturday, February 7th with a Celebration of Life open house to be held in the late spring, with dates to follow.

Harold L. (John) Snyder, was born May 6th, 1929 in Lakeside, WA to Joseph and Frances (Bieber) Snyder. He was the youngest of 12 siblings. He attended the Lakeside Primary School and then attended Chelan Junior and Senior High School, graduating... View Obituary & Service Information

The family of Harold L. (John) Snyder created this Life Tributes page to make it easy to share your memories.