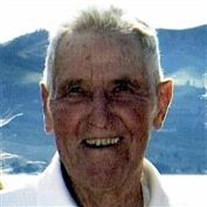 - Harold E. Pittman, 95, passed away peacefully on Monday Feb. 11, 2019 surrounded by family at Lake Chelan Community Hospital. He was born June 19, 1923 in Manson, Washington on the family homestead of Georgia and Donald Pittman, the 3rd eldest of 12 children. His surviving siblings are Evelyn Pearce (CleElum), Janet Moon (Selah), and Kendall Pittman (Chelan). Harold graduated from Manson High School in 1941 and went to work for Boeing. He served in the Army Air Corps during WWII, as a maintenance mechanic for the 15th Airborne Division. After the war he met Nora (Maxine) Brown on a return trip from his service on a bus, where she gave up her seat for him. They wrote to each other and courted, marrying on May 5, 1946. Together they raised three sons at the home he built in the Rainier Beach District in Seattle.  Creating a partnership in 1969 with his brother Lowell Pittman, they began Pittman Brothers Orchards in Manson where he farmed part time. He retired from Boeing after 38 years in 1980 and moved from the family home in Rainier Beach back to Manson to farm full time, posting his new home and planting more orchards. The family farm is still operated by his sons and grandsons as a multi-generational family affair. Harold was active in Blue Chelan/ Trout Co-op, serving as Chairman of the Board from 1987-1995, Manson Kiwanis, Cub Scouts and Boy Scouts. His passions were building, fishing, hunting, orcharding and his family. He lived fully for 95 good years with the last 40 on tractors and four-wheelers in his orchard, living in his family home until the end.  Harvest time continuously brought smiles and family together, with annual cider making inviting in more extended family and friends. Family is the fabric of the universe and Harold was eternally proud and reminded most at gatherings of what he and Maxine started. Harold was preceded in death by his wife Maxine on March 12, 2007, and oldest son Terry Pittman on July 14, 2016. He is survived by his two sons, Rick (Kathy) Pittman of Manson, and Harold N. (Sherry) Pittman of Manson, and daughter-in-law Linda Pittman of Manson; 8 grandchildren - Lindsay (Craig) Timmermans of East Wenatchee, Kristyn (Donovon) Hackman of Kent, Nicholas (Robin) Pittman of Manson, Ryan (Danielle) Pittman of Maple Valley, Shawn (Kerianne) Pittman of Manson, Darryl (Jennifer) Pittman of Manson, Shannon (Justin) Perri of Manson, Rob Pittman of Manson, and 14 great grandchildren. A Graveside Service will be Monday February 18 at 1pm at Chelan Fraternal Cemetery followed by a Celebration of Life at Lake Chelan Boat Club.

- Harold E. Pittman, 95, passed away peacefully on Monday Feb. 11, 2019 surrounded by family at Lake Chelan Community Hospital. He was born June 19, 1923 in Manson, Washington on the family homestead of Georgia and Donald Pittman, the 3rd eldest... View Obituary & Service Information

The family of Harold Edwin Pittman created this Life Tributes page to make it easy to share your memories.