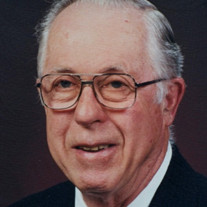 Harold Dean Hortin, 87, passed away Thursday, April 24, 2014, at St. Peter Hospital in Olympia, Washington. He was born January 23, 1927 to Harold Raymond and Helen Crome Hortin in Decatur, Illinois. He graduated from Assumption High School in 1944 and immediately joined the U.S. Army to become an aviator. At the end of the War in 1945, the Army decided it needed more cooks rather than aviators, and so began his journey as an Army cook. Dean received an honorable discharge a year later when the war ended and he returned home to finish his flying lessons, earning his private pilot’s license in 1947. He decided to travel west and attended Washington State College for two years, studying horticulture. Traveling to Lake Chelan with friends, he met Rosemary Lou Thayer at a community dance in Manson, Washington. She was from Seattle and was also visiting friends in Manson. After a whirlwind romance, they wed on June 24, 1950, in Seattle. The lure of apple orchards was too much and the newlyweds moved back to Manson where he worked in the apple orchards until he could afford one of his own. Dean continued on with his apple orchard and also started working summers for the U.S. Forest Service in the Chelan District of the Wenatchee National Forest, based in Chelan, Washington. He started as a summer fire fighter and, over the next 21 years, worked his way up to the Fire Control Officer of the district. He also received training in fire weather and traveled to many of the Western States to run weather centers for large fires. He played an integral part in the development of helicopter firefighting repelling crews. These crews would repel from helicopters on ropes at pinpoint locations, which was much more effective and efficient than using smokejumpers. It also allowed fire crews to access areas smokejumpers could not reach. Upon retirement from the Forest Service, Dean worked part time at the Resort at Wapato Point in Manson, Washington. Starting out part time, his organizational skills were immediately recognized, and he was made supervisor of the house cleaning division. During the summer, the housekeeping crews often numbered 200 people, most of them women. He was often asked how his “harem” was doing! This always made him chuckle and smile his impish grin. He worked there for ten years, finally deciding it was time to really retire. He and Rosemary spent many winters in Yuma, Arizona amongst friends. They loved outdoor games of holey board, cards, making iron wood belt buckles, and being together. Everyone became instant and longtime friends. With the death of Rosemary in 1997 from cancer, he married Dorothy “Dottie” Harmon in 1998. They enjoyed many years of traveling and visiting with friends and family. Dean and Rosemary had three children, Debra Johnson (Scott), Alan Hortin (Becky), and Jeffrey Hortin (Rod Sanches), all of Olympia, Washington. They have four grandchildren, Bryan Johnson of Seattle, Matthew Johnson (Lena Jones) of Seattle, Melissa Hortin Anderson (Brett) of Olympia, and Jason Hortin (Melanie) of Chicago, Illinois. Dean had two great-granddaughters, Linnea Johnson of Seattle, and Penelope Anderson of Olympia, and a great-grandson due this September. He dearly loved spending time with his children, grandchildren and great-grandchildren. Family was his pride and joy. Dean was preceded in death by his parents and his sister, Charlotte. Dean loved gardening, more specifically, Roma tomatoes and Blue Lake pole beans, carrots and radishes. At their retirement home at The Woodlands, he constantly raised surplus veggies, which were in high demand and highly regarded by friends and family. He received great joy when he could give them away to other people so they could experience the joy and flavor of home grown vegetables…grown with love. Nothing gave him more pleasure than his nine-foot-tall tomato plants! You only had to mention tomatoes, and he would pull out his photographs of them to share. He also loved making friends. If you weren’t his friend, it was only because you had not yet met this kind, gentle, generous, big hearted man.

The family of Harold Dean Hortin created this Life Tributes page to make it easy to share your memories.