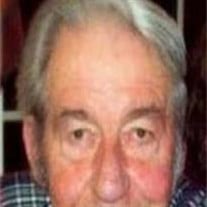 Harold Gene Flynn Harold Gene Flynn passed away Saturday, February 23, 2013 in Wenatchee surrounded by his family after being diagnosed with lung cancer. Harold was born March 12, 1936 in Wenatchee to Thomas and Alvina (Kuhlman) Flynn and was one of five Flynn children; Loretta, Margaret, Eldon, Nona and Harold. Harold attended school in the East Wenatchee – Wenatchee area graduating from Wenatchee High School is 1954. Dad spent many summers during his youth in Brewster with his sister and brother-in-law, Loretta and Bud Joy on their cattle ranch just outside Brewster. During these summers he worked and enjoyed the ranch, learning the ranch life and gaining skills he would carry throughout his life. He also acquired the love of horses and participating in many Horseman Association events - competing in a variety of them with Uncle Bud and the team they had built. Dad went on to win the Washington State Pole Bending competition in 1954. During this time in his youth he also met his wife-to-be Betty (Cox) Flynn. They married on February 3, 1957 in Crystal Springs, Arkansas upon his honorable discharge from the Army. Dad and Mom made their lifelong home in Brewster where Dad left the ranch life and started his career with the Postal Service in January of 1960. He built his own home place where, he and Betty also raised their three kids, Tom, Lonnie and Tonya. Dad so enjoyed being outside, working the land; he grew alfalfa and wheat on his own place, but always took the majority of his vacation each summer to go back and work the wheat harvest with Uncle Bud – to Dad that WAS a vacation! Harold was also an active member of American Legion Post #97 participating in their color guard and the various events the American Legion supported. Dad and Mom were also active members of the Brewster Bridle Club where our family would often “saddle up” on a weekend morning and ride into some nearby creek or valley for breakfast with the Club. They were members of the Bridgeport Eagles and another fun gathering they referred to as Club 40. Club 40 was a group of couples who would gather every other month for a dress up dinner and dance around the Brewster, Bridgeport, Pateros area. They always looked forward to those nights out with friends. In 2001 Dad lost the love of his life, his wife Betty, to pancreatic cancer. Although life did go on, there was always a part of Dad that didn’t move on much. He missed his Betty. But, Dad also had the joy of seeing his grandchildren grow into adults, some from afar and some right here in the Brewster area. He was also here to see the arrival of his two Great Granddaughters – which I’m sure he’s already shared with Mom! Harold was preceded in death by his parents; his wife, Betty Flynn; two sisters, Loretta Joy and Margaret Garinger; and the tragic passing of his nephew, Dean Guthrie and his niece, Toni Shaw. Harold is survived by his son, Tom (Roni) Flynn of Brewster; his daughters Lonnie (Doug) Petersen of Wenatchee, and Tonya (Bill) Vallance of Brewster; his seven grandchildren, Genea, Wade and Thomas Flynn, Chris and Kelly Peterson and Kevin and Kendra Vallance; and his two great granddaughters, Danica and Makinley Cardona. Services for Harold will be held Friday, March 1, 2013 at 1:00, Barnes Chapel in Brewster, followed by a military burial at the Brewster Cemetery with dinner following at the American Legion in Brewster. Should anyone wish to contribute in Harold’s name, in lieu of flowers, the family requests those contributions go to Hospice, 1020 N. Wenatchee Avenue, Wenatchee, WA 98801. Services have been entrusted to Barnes Chapel, Brewster. Please feel free to leave comments and share stories for others to see.

The family of Harold Flynn created this Life Tributes page to make it easy to share your memories.