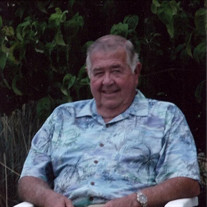 82 YEAR OLD, LONG TIME CHELAN RESIDENT, COMMUNITY ADVOCATE, & BUSINESSMAN Jerry Morton went home to our Lord June 24, 2014. Monday, June 23rd Jerry & a friend were working on starting a dump truck & he was critically burned. Jerry was taken to the L.C. Community Hospital, and then transported to Harborview in Seattle. The Lord mercifully took him home early Tuesday morning in the presence of his family. Jerry (Gerald H.) Morton was born February 27,1939 to Lloyd & Jewell Morton. His parents owned a grocery store, meat market, gas & repair station, and a restaurant on the upper end of Woodin Ave. in Chelan. Jerry, his three brothers, Harold (Sam), Ellis, and Marvin, and their younger sister Alice (Adams) all attended Chelan schools. Jerry was born, raised, educated, and lived in Chelan his entire life. His great granddaughter was the 7th generation to call Chelan home. Jerry was a friend, husband, father, grandfather, son, brother, neighbor, milkman, avid sports fan, baseball coach, politician, community advocate, Eagle, fundraiser, & co-founder of Eagle Valley campground for youth and families and Eagle members in Cle Elum. On September 28, 1949 Jerry married his high school sweetheart, Joan (Marjorie) Greenway. They raised two daughters, Jeri (Dowell) and Jacque (Oden). Family and their home were important to both Jerry and Joan. In 1962 they purchased their home, “The Rock House” in the Lakeside area, one of the few remaining older homes in the area built from solid boulders. Oh how much Papa was loved by his kids & grandkids. How much we miss him. We were so lucky to have had him as ours for 82 years. In 1953 Jerry went to work as a milkman for Del Griffith, delivering commercially to Chelan and Manson, and commercial and home deliveries in Pateros, Brewster, and Bridgeport. In 1973 he purchased the company and formed Morton’s Milk Delivery, Inc. In 1953 Jerry also joined the Chelan Eagles, F.O.E. #2218. In 1958 he became the president of the local aerie and in 1969 he became the State President, the youngest in the nation to hold that title at that time. As his State project Jerry talked the women’s State President into joining him to co-found Eagle Valley. It was originally intended to be the permanent youth site for their youth conventions, with ball fields, camping and various amenities to support youth and their families but has turned into a beautiful 43 acre campground for families, youth groups, and Eagle members. Jerry coached baseball for a number of years, Little League, Babe Ruth, Pony League, and American Legion. His players were from Chelan, Manson, Pateros, Brewster, Bridgeport, Mansfield and Waterville. Jerry loved the players, their families, the game and the fans. Jerry was Chelan’s Lions Club president in the 70’s. He belonged to a number of clubs in various areas around the state, the Sportsman Club in Soap Lake, and a number of Eagle aeries. In 1989 he bought the Texaco gas station on the corner of Woodin Ave. and Columbia. After 60 years of marriage he lost his wife, Joan, while they were wintering in Palm Springs, CA in February 2010. June 6, 2011 Jerry married a long time friend and co-board member of Eagle Valley, Patricia (Pat) Durham. They made their home in the “Rock House” in Chelan where Pat still resides. During their short 3 years of marriage he and Pat enjoyed traveling, wintering in the Palm Springs area with Jacque and the Mamaes, and working at Eagle Valley, unquestionably his life’s legacy. “; all the days ordained for me were written in your book before one of them came to be.” Psalm 139:16 “I’m back home in the house of God for the rest of my life.” Psalm 23:6b Jerry is survived by his wife of the home, Pat Morton; daughter, Jeri Dowell (Al Cole), grandchildren, Brandon Dowell, Damian Mamae (Bob), great grandchild Staesha Mamae, step grandsons Tracy Dowell, Troy Dowell (Linda); daughter, Jacque Oden, grandchildren, Lance Sperry (Natalie), greats Robert and Nickie, grandson, Nicholas Oden, step grandchildren Jerod Oden and Allyson Rassmussen. He is also survived by his brothers, Ellis (Bonnie) Morton, Marvin (Rosalynne), and sister Alice Adams (Buell). Jerry was preceded in death by his parents, his brother Harold (Sam) and his wife, Joan Morton. Commemoration Services will be held Saturday, August 2, 2014 at 11:00am in Chelan at the Community Gym, 303 E. Johnson and Sanders with Pastor Gordon Hyde officiating. A dinner will follow upstairs at the Chelan Eagles on Woodin Ave. It was Jerry’s dream to build baseball fields at his beloved Eagle Valley. Memorials may be made in his honor to Eagle Valley, Box 1059, Chelan,WA 98816.

The family of Gerald H. "Jerry" Morton created this Life Tributes page to make it easy to share your memories.