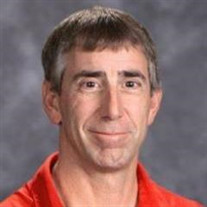 Gary Lee Knowlton Gary L. Knowlton, 50, long time resident of Brewster WA, went home to be with his heavenly Father on July 16, 2016 at 8:22 pm. He was born on September 9, 1965 to the proud parents of Patsy Knowlton and Micheal Knowlton both of Brewster. Gary was a 12 year Senior of the Class of 1984 at Brewster High School, where he participated in football, basketball, track, band and FFA. He furthered his education at Spokane Falls Community College, Participating in football and track and field. Gary then transferred to Whitworth College, graduating in 1989 with a Bachelor of Arts degree in Elementary Education. He later received his Masters. While attending Whitworth he made Nationals in Track and Feld, specializing in the Decathlon placing 10th. He met and fell in love with Deana Schulz and they were married on September 3, 1988 in Twisp, WA. Later they had two beautiful daughters, Kari and Krysta. They made their home in Brewster, WA. He began his teaching career, of 19 years at Brewster Elementary. In his spare time, he lifeguarded for 32 years starting at the Brewster Pool and then moved on to the Manson Bay Park; he was a referee for 14 years and gave a T (technical) to his boss. He had a passion for biking which he did every day, especially his trips to Manson and around the State. Gary attended Brewster Assembly of God for 50 years. Through his life there he has graced the congregation with his trombone playing, running the sound system and was a member on the Church board. He is survived by his wife of 27 years, Deana, two daughters Kari and Krysta of Spokane, mother Patsy Knowlton, Brewster, father Micheal Knowlton, Brewster, brother Ron and wife Charlene Knowlton, Ryan and Aaron, Puyallup, sister Shari and husband Kevin Elliott, Maddie and Jack, Richland, grandfather John Knowlton, Wenatchee and numerous Aunts, Uncles, and Cousins. Gary was preceded in death by his grandparents Pat and Betty Troutman and Clara Knowlton. A Celebration of Life will be held at 12/noon Saturday, July 30, 2016 at Brewster High School Gymnasium, Brewster WA. There will be a viewing on Friday July 29, 2016 between 4pm and 8pm. A private family graveside service will be held. Arrangements are in the care of Barnes Chapel, Brewster. In lieu of flowers donations may be made to Brewster Elementary School for supplies or to the North Cascade Bank for college expenses for Krysta and classroom expenses for Kari. Donations can be made at any North Cascade Bank and checks can be written to Gary’s daughters Kari or Krysta Knowlton and mailed to North Cascade Bank in care of Kari and Krysta Knowlton P.O. Box 7 Twisp, WA 98856

Gary Lee Knowlton Gary L. Knowlton, 50, long time resident of Brewster WA, went home to be with his heavenly Father on July 16, 2016 at 8:22 pm. He was born on September 9, 1965 to the proud parents of Patsy Knowlton and Micheal Knowlton both... View Obituary & Service Information

The family of Gary Lee Knowlton created this Life Tributes page to make it easy to share your memories.