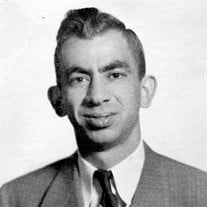 Garold Kenneth Osborn passed away in his home at The Harmony House in Brewester, WA on June 7, 2015. Born on November 21, 1921 in Glencoe, Oklahoma, Garold was 93 years old. Garold grew up on his family’s farm in Morrison, Oklahoma. After graduating from Morrison High School as Valedictorian of his class, he spent several years in the Civilian Conservation Corp before joining the Army to answer his countries call for World War II. Garold was part of the landing forces on the beaches of Italy and saw action as the US and her allies drove the Germans back across Europe. Discharging in 1945, Garold attended the University of California Berkley where he earned his master’s degree in Animal Sciences. Garold was employed by the US Department of Naval Warfare for over 40 years, and was a published author for his experimental work in radiation, and climate acclimation training. Garold retired to Boulder City, Nevada where he was a volunteer for organizations such as Lend A Hand, his Church, The Public Library, The Boulder City Chamber of Commerce and the Boulder City Tourist Train. He fulfilled his life of service by building a trust fund naming Father Flannigan’s Boys Home as beneficiary. In retirement Garold was able to travel extensively and visited countries such as France, Italy, Germany, Russia, Ireland, Iceland, Mexico, The Amazon, The Galapagos Islands, Thailand to name a few. Garold is survived by his sister Virginia Broadbent of Okanogan, WA. Nieces Marlene Jorgensen of Pagosa Springs, Arizona, Jeannie Hunter of Okanogan, WA and Michelle Balduff of Seattle, WA. Nephews Thomas Van Arsdell of Federal Way, WA, Ken Balduff of Bonney Lake, WA. Great Nieces Audrey Hunter of Tacoma,WA , Erin Balduff of Bonney Lake, Wa. Great nephews Brandon Hunter of Anchorage, AK Garrett Balduff of Olympia, WA Taylor Balduff of Puyallup WA. And Great Great Nieces Kassandra Hunter of Tacoma, WA and Jaeda Walker of Bonney Lake, WA. And Great Great nephews Zachary Hunter of Tacoma, WA, Jace Osborn of Bonney Lake, WA and Jaxon Walker of Bonney Lake, WA. Memorial services will be announced later.

Garold Kenneth Osborn passed away in his home at The Harmony House in Brewester, WA on June 7, 2015. Born on November 21, 1921 in Glencoe, Oklahoma, Garold was 93 years old. Garold grew up on his family&#8217;s farm in Morrison, Oklahoma. After... View Obituary & Service Information

The family of Garold Osborn created this Life Tributes page to make it easy to share your memories.

Garold Kenneth Osborn passed away in his home at The Harmony...