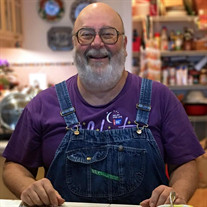 Fredric Iver Schmidt, born March 24, 1954 died at his home in Mansfield on August 25, 2017 following a sudden illness. He graduated from Bridgeport High School in 1972. Fred later attended Washington State University and Seattle Central Community College. While Fredric had lived in Mansfield for almost forty years at the time of his death, Bridgeport was his home town. He supported the schools and all sports programs in both communities. He rarely missed Bridgeport Daze and Mansfield Play Days. The Lion’s Club Auction in Mansfield was one of his favorites as it would be for anyone who was an avid collector of all things an apt description of Fred. At age 14 Fredric got his agricultural driver’s license and started working with his father on the family farms in Mansfield and Leahy. He was employed for five years at Western Farm Service in Mansfield. Later he became a teamster and drove for Mumma Trucking first from their Brewster office and then from the Chelan office. He spent a number of years at Hanford transporting workers and had various other short term driving positions before his health required him to discontinue trucking. At the time of his passing, he had been employed for a number of years by Jason and JoAnn Tanneberg once again working on a farm. A lot changed during the almost 50 years that Fredric was a farmer- he was always happy to be on the tractor or up in the combine making his way around a field, the only thing better than farming was telling stories about farming. Fred was a member of the Lake Woods Golf Course and played there for many years. He rode snowmobiles, downhill skied, water skied, enjoyed fishing and boating and followed several professional sports teams especially the Seahawks. Fred survived kidney cancer in 2007 and thereafter he was a regular participant in the Relay for Life events in Okanogan. From the time he was a small boy, Fred had a good and giving heart. He was always the first to volunteer to help anyone he knew no matter how small or large the task. He was a gifted storyteller (like his father) and seemed to have an encyclopedic knowledge of all things related to families in Bridgeport or Mansfield (like his mother.) He was a loyal friend to many and will be remembered for his hearty laugh and big smile. Fredric is survived by his sister, Kathleen E Schmidt, Portland OR and his beloved niece, Emily E Schmidt, Portland OR as well as his aunt, Ann Bolander of Richland. He was preceded in death by his much loved grandparents, Fred and Myrtle Schmidt and by his parents, Wayne F. Schmidt and Olive E. Schmidt who had all made their homes in Bridgeport. His life-long friends, Hal Rogers, Mark Steele and Jerry Steele always had his back. A Celebration of Life service will be held at the Barnes Chapel in Brewster, WA on September 8, 2017 at 11 am. A luncheon at the Bridgeport Eagles will follow at 1 pm. Memorials can be made to the American Cancer Society, the Mansfield Ambulance or the charity of your choice.

The family of Fredric Iver Schmidt created this Life Tributes page to make it easy to share your memories.