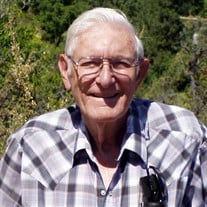 Fred Ernest Whitley (Ernie), 90 years old of Brewster, Washington, died October 21, 2016 in Wenatchee, Washington, at Blossem Creek memory care facility. Ernie was born to Fred Martin Whitley and Alta Bedelia (Housden) Whitley on April 12, 1926, on Dyer Hill, Douglas County, Washington. Ernie grew up in the Brewster area and attended school up to the 10th. Grade. At the age of 16, Ernie went to live with his sister in Seattle, Washington, where he started his career at Seattle Transit Authority taking care and moving the busses. This started his love for big trucks. Soon he was a co-owner, with his brother-in-law Carol Porter, of a long-haul trucking business. They drove all over the country hauling any and everything. Ernie went into the Army in 1954 and was in during the Korean war until June 7, 1956. During that time he received a Good conduct medal, a GED and took some college classes. On March 27, 1954, Ernie married his first wife Janice L. Staton. Janice brought into the marriage two young boys, Kurt Simpson and Sam Simpson. During this time, he went to work for Boeing. Ernie and Janice had a son Gary Ernest Whitley Born March 5, 1957. After the birth of Gary, they moved back to the Brewster area and the family lived and worked at Crane orchards, where they had a daughter Karen Lorraine Whitley (Payne) on September 4, 1960. Ernie continued to be a foreman for the Cranes until 1970. Then Ernie and his family moved to River Plaza in Brewster and he then started driving truck for Mumma Trucking. After that he drove truck for Magi, transporting fruit to Seattle on a daily basis until his retirement at the age of 70. Ernie and Janice were divorced early in 1974 and Ernie then rekindled his relationship with his childhood sweetheart Marie Bowles (Crabtree, Burton) from Bridgeport. Marie brought to the family three adult children Marylon, Judy, and Ron Crabtree. Ernie and Marie lived a full life after his retirement and traveled all over the country. Marie passed away October 4, 2003. Ernie continued to live at Brewster Plaza and was always surrounded by many friend’s neighbors, and family there. Ernie was an active member of the Brewster Senior Center. Ernie also was a lifelong member of the Reorganized Church of Jesus Christ of Latter Day Saints, as was his parents and grandparents. Ernie was preceded in death by his parents Fred and Alta Whitley, his siblings Margret Whitley (Porter), Doris Whitley (Paschal), Thomas and Reuben Whitley and an infant sister Mary Ann, his wife Janice, his wife Marie, and stepson Kurt Simpson, and stepdaughter Marolyn Crabtree (Brown). Ernie is survived by his children Gary Whitley of Fairfield, California, Karen L. Whitley (Payne) of Grand Coulee, Washington, Sam Simpson of Olympia, Ron Crabtree of Oregon, and Judy Crabtree (Styles) of Wenatchee, Sister-in-laws Patsy (Reuben) of Brewster, and Alice (Thomas) of Des Moines, Washington, Ernie had many grandchildren and many great-grandchildren. A funeral service will be held October 29, at Barnes funeral home in Brewster Washington at 11:00 am with a viewing at 10:00 am. Immediately following the service the burial will be at Packwood Cemetery. Following the burial at Packwood there will be a reception around 1:00 pm at the Brewster Veterans hall at 538 Main St. Brewster, Washington. Please come and share your memories of this long-time Brewster resident.

The family of Fred Ernie Whitley created this Life Tributes page to make it easy to share your memories.