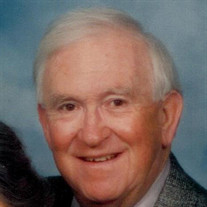 Longtime Manson, WA resident, Fred J. Barnes, passed away March 12, 2016. He was born in Gresham, Nebraska on February 5, 1926, to Fred Barnes and Lillian Nehser-Barnes. A proud World War II veteran, he attended Kapowsin High School and enlisted in the Army Air-Corp service in 1943 at the age of 17. In 1947 he married Mildred Urdea, resulting in a long and loving union of 64 years. The couple moved to Fircrest, WA, where they had two children, Brad and Rebecca. The family then moved to Wenatchee in 1961 and Manson in 1981. Fred’s notable accomplishments include graduating from the College of Puget Sound followed by a job with the Tidewater Oil Company. He began his banking career at Central Washington Bank before becoming an original Founder and Director of North Cascades Bank, and spent the middle to late years of his life as an Orchardist. Fred was a loving husband, father, grandfather and friend to many. He was extremely committed to his family and the Lord, always offering reliable advice or a sharply recalled story about growing up, for which he will always be remembered. He was preceded in death by his father, Fred; mother, Lillian; and wife, Mildred. He is survived by his daughter, Becky Lorenz (Eric) of Chelan; son, Brad Barnes (Diane), and two grandchildren, Ben and Katie Barnes of Manson. Services will be held at 10:00 a.m. on Monday, March 21, 2016 at Precht Rose Chapel in Chelan, followed by Graveside Services at Fraternal Cemetery in Chelan. All are invited to the home of Phil and Mary Long for a reception after the Graveside Service

The family of Fred James Barnes created this Life Tributes page to make it easy to share your memories.