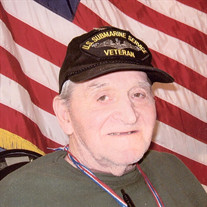 Born November 24, 1932 to Ralph and Amy Austin in Twisp, WA. Passed away July 21, 2014 at Colonial vista Nursing Home in Wenatchee with family by his side. Frank spent the last four years at Colonial Vista as a result of a horrific car accident in June of 2010. Frank was a lifelong resident of the methow valley and a veteran of the Korean War with the U.S. Navy. He earned a purple heart while serving his nation. He was a man who would give a person “the shirt off his own back” and would do anything for you. Frank spent many years working for the mill in Twisp, and many years for the Forest Service as a crew boss for the HotShot fire crew. Frank was an avid outdoorsman. He loved to fish, hunt, hike, and play in the mountains and prospect up the Twisp River. He will be deeply missed by his family and friends. May you rest in peace, our loving father, brother, grandfather, and friend. Frank was survived by his children Bill Austin (Lightning Bill) of Bridgeport, Harvey Austin of Twisp, Debbie Waymire (Buki) of Bridgeport, and Henry (Shelly) Austin of Bridgeport. He is further survived by his grandchildren Garrett McCracken, Courtney Austin, and Savannah Austin. His surviving siblings include Dave (Sharon) Austin and Bob (Connie) Austin of Twisp, Edna Best of East Wenatchee, Nellie Harris and Doris Tideman of Seattle, Pearl (Virgil) Imes of Okanogan, and many nieces and nephews. Frank was preceded in death by his father and mother, Ralph and Amy Austin, daughter Thelma, brother Ralph (Joyce), ex-wives Mary and Louise, and step daughter Mary Lara. R.I.P.DAD WE LOVE YOU!!!!!!!! A special thanks to Aunt Edna, cousins Cindy and Suzy, and Uncle Dave and Aunt Sharon for all the hours you spent with dad!! There will be a public visitation at Barnes Chapel Wednesday Wednesday, July 30, 2014 from 5 PM to 7 PM.. Services for Frank Henry Austin will be Thursday, July 31, 2014 at 11 A.M. at Barnes Chapel in Brewster, WA.. There will be a graveside service immediately following at Beaver Creek Cemetery in Twisp, WA. at approximately 1 P.M..

Born November 24, 1932 to Ralph and Amy Austin in Twisp, WA. Passed away July 21, 2014 at Colonial vista Nursing Home in Wenatchee with family by his side. Frank spent the last four years at Colonial Vista as a result of a horrific car accident... View Obituary & Service Information

The family of Frank Henry Austin created this Life Tributes page to make it easy to share your memories.