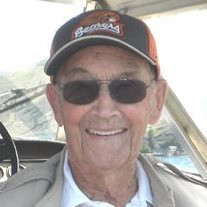 A sweet man of many talents, Floyd was first an orchardist in the Entiat Valley, and then most of his life in the Cashmere Valley, until his retirement. He and several grower friends were instrumental in starting Cascoa, the Cashmere co-op, where he served on its board of directors for 32 years. After his retirement when wife Dutch’s health deteriorated, (they were nearly able to celebrate their 75th wedding anniversary!), they moved to Lake Chelan to be near their daughter, Joyce. Floyd and his 3 brothers were a musical group for several years, singing and playing their instruments, where his specialty was Hawaiian guitar. They had a weekly radio show, and also entertained Governor Martin on one occasion. He and good friend Bert Paine flew all over the state of Washington and much of the western U. S. One year they rebuilt a plane in Cashmere and flew it to Michigan. He and his brother Jack owned a pack string, and went elk hunting every year for 40 years in the Naneum basin. He introduced his grandson Mark to this adventure, where Mark killed his first bull at age 15. Mark and "Gramps" swapped hunting and fishing stories almost daily, especially in these later years. In Floyd’s retirement years, Mark accompanied him, and Mark's father Bill, on many fishing and hunting expeditions from the Florida Keys to Alaska. Many of their best times were fishing on Lake Chelan from the “Punkee” - a boat Floyd built himself. “Gramps and Grams” attended every horse show and fair that their granddaughter Tammy participated in – pulling their travel trailer so she and her friends had a warm bed, a place to change clothes, and could enjoy a warm meal with Grams’ special soft oatmeal cookies. Floyd was an avid snowmobiler with friends Virginia and Bert Paine, as well as brother Jack and nephew Daryl, venturing so far as Yellowstone Park. For 10 years the Kirbys spent winters in Phoenix. Floyd and Dutch were always Cashmere Bullldog supporters – and so proud of their son, “Vernon Choo Choo Kirby” during his playing days for Coach Bill Lippincott. After Floyd’s retirement, he continued to grow beautiful vegetable and flower gardens, especially his beloved roses. Several of the rosebushes from his garden at his home in Cashmere even moved to his granddaughter Tammy’s home, so she could continue his tradition of growing beautiful roses. This took up his springs and summers – then not able to be idle when the growing season was over, he enjoyed his talent for oil painting. Floyd also learned to be a Chelan Goats fan, as his great grandchildren played multiple sports. Great granddaughter Kilee went on to play Pac- 10 softball at Oregon State University. He was invited to throw out the first pitch at the Oregon State versus Arizona softball game on his 99th birthday. He was proudly escorted onto the field by great granddaughter Kilee, representing her Oregon State Beaver teammates. He was honored further at a dinner celebration after the game, which was attended by nearly the entire OSU team and many of the Arizona athletes, where he was presented with autographed balls from both teams. He was very special to many of those girls and their families. Floyd traveled to many of Kilee's college games, as well as to ALL of her high school games. He also enjoyed fishing with grandson Jarret, and passed on his strong work ethic and artistic talent to him. Jarret and Kilee’s friends were inspired by his love for life and wisdom of so many years, and lovingly called him “Kirb Dawg”. As a Seahawks fan, he enjoyed the Super Bowl from his hospital bed with a package of Skittles, and his daughter Joyce nearby – and he left us a few hours later. Floyd and Dutch were members of the Cashmere Presbyterian Church for many, many years, where Floyd served as a deacon of the church for several years. Floyd was born 4-10 -12 in Watseka, Illinois, the son of Lillie L. Buzard and Marvin J. Kirby. He was the oldest of six children and is survived by daughter, Joyce Lippincott, of Chelan, WA; granddaughter, Tammy Roark (Rob), of Yacolt, WA; grandson, Mark Lippincott (Shelly) of Chelan, WA; granddaughters, Andrea and Drue; great grandchildren Jarret and Kilee, and sister Vanessa Arteman of New Mexico. He was preceded in death by his wife, “Dutch”, son Vernon, 3 brothers and l sister, and son-in-law Bill Lippincott. Always encouraging and never an unkind word, Floyd's legacy will live on with so many he touched over his incredible life. He was truly "First Class". A big thank you to Floyd’s special doctor and friend, Dr. Charles Waszkewitz and the staff at Lake Chelan Community Hospital. Memorials in Floyd’s name may be made to the Rocky Mountain Elk Foundation. Contributions are used to protect habitat for elk and other wildlife. The RMEF was instrumental in a recent land swap that helped to protect his favorite Naneum basin hunting area. Please be sure to include “Floyd M. Kirby Memorial” in your contact with them. Rocky Mountain Elk Foundation P.O. Box 8249 Missoula, MT 59807-8249 Phone (800) 225-5355 Memorials may also be made to the Cashmere Presbyterian Church in memory of Floyd P.O. Box 243 Cashmere, WA 98815

A sweet man of many talents, Floyd was first an orchardist in the Entiat Valley, and then most of his life in the Cashmere Valley, until his retirement. He and several grower friends were instrumental in starting Cascoa, the Cashmere co-op,... View Obituary & Service Information

The family of Floyd M. Kirby created this Life Tributes page to make it easy to share your memories.

A sweet man of many talents, Floyd was first an orchardist in...