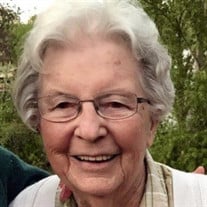 Evelyn Violet Darwood, born February 5, 1931 at Boyd District in Chelan, was the fourth daughter of Harley and Leila Knowles. A two-time rodeo princess, Evelyn was also very involved in the 4-H club and an avid cheerleader during her high school years in Chelan. Shortly after graduation she married Reid Morton, the first love of her life, and was soon blessed with two daughters, Darralyn and Melinda. After Reid’s untimely passing in 1956, Evelyn had the good fortune to meet Stanley Darwood Jr. at a Winthrop 49ers dance. A marriage soon followed on May 28, 1958, after which Evelyn became a mother to Chrissy and Steve, and together Evelyn and Stan raised their four children at their new family home on Beaver Creek. In addition to being a full-time mom, Evelyn worked for Ralph Ferguson at his insurance office in Twisp, which was later sold to her daughter Melinda and is currently operated by two of her granddaughters. In her free time, Evelyn was an avid gardener whose house was known for the beautiful flowers in her yard, as well as an accomplished quilter: to this day her grandchildren enjoy the fruits of her labor. Easter Sunday became a cherished family tradition for her kids and grandkids, thanks in large part to Evelyn’s famous no-bake cookies and homemade apple pies. In later years Evelyn enjoyed playing Bridge with her friends at the senior center, square-dancing, and exploring the southwest with her beloved Stan, in Yuma, Arizona which served as their home base during the winter months. After Stan’s unfortunate passing in 2011, Evelyn made the Methow her full-time home, later relocating to Wenatchee, remaining close with her children and grandchildren, who will all remember her fondly. Evelyn is preceded in death by her two husbands, her parents, and her three sisters Ruby Swanson, Vivian Carson, and Patsy Morton. She is survived by daughters Darralyn Darwood (Wayne), Hayden, Idaho, Melinda Bourn, Winthrop, Chrissy Darwood, Las Vegas, son, Steve Darwood, Twisp, and her brother, Harlan Knowles, Silver Creek, as well as 11 grandchildren and 18 great grandchildren. We would like to thank Blossom Creek of Wenatchee for the special care that was given to our mother for the last 3 years. Due to Covid-19 the family will be having a private service. In lieu of flowers, please consider donating to a local nonprofit to honor Evelyn’s love of Bridge, dancing, and socializing – The Methow Valley Community Center: PO Box 565 Twisp, WA 98856, which continues to serve our senior community.

Evelyn Violet Darwood, born February 5, 1931 at Boyd District in Chelan, was the fourth daughter of Harley and Leila Knowles. A two-time rodeo princess, Evelyn was also very involved in the 4-H club and an avid cheerleader during her high school... View Obituary & Service Information

The family of Evelyn Violet Darwood created this Life Tributes page to make it easy to share your memories.