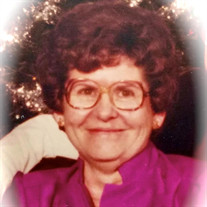 Eula L. Jeffries, 93, went home to be with her Lord September 24, 2021. She was born in her parents’ home near Stockton, Missouri, the oldest child of Lee and Esther (Metcalf) Cooper. She was saved in July, 1946 at Jerico Springs Missionary Baptist Church in Missouri. She was a charter member of New Home Missionary Baptist Church in Manson, Washington which was organized in 1954. She married Meredith Jeffries on December 23, 1944 just prior to him going on active duty in the U.S. Navy. She lived in Richmond, California in the San Francisco area while her husband was on an aircraft carrier during World War II. Meredith and Eula were blessed with four sons, Wesley, Gary, Marv and Ron. They moved to Washington State in 1946, where they worked in apple orchards. Eula also worked at Valley Evaporating Company in Chelan Falls and Trout, Inc. in Chelan. They purchased their own orchards and later worked with sons Ron and Marv in their orchards. She had a great love of God, Church, family, and friends. She kept a large garden and yard for many years, sharing the bounty with family. She was actively involved with and loved watching her sons and their families, as grandkids and later great grandkids joined the family. After her husband passed away in 2012, she loved mowing her lawn and continued mowing it until she was 90. She was determined to keep mowing the lawn after that, but was finally talked out of it by her sons. Eula lived at home until August of 2020, then moved into Heritage Heights in Chelan. She was preceded in death by her husband, Meredith S. Jeffries, her mother and father, and three brothers. Eula is survived by her four sons, Wesley Jeffries and wife Marcene of El Dorado Springs, Missouri, Gary Jeffries and wife Sheryl of Wenatchee, Washington, Marv Jeffries and wife Karen of Manson, Washington and Ron Jeffries and wife Andrea of Manson, Washington, eight grandchildren, sixteen great grandchildren, sisters Shirley Batchelor of Manson Washington, Patsy Eli of Chelan, Washington, and brother Jim Cooper of Chelan, Washington. Eula’s death was the same day coincidental with the death of her sister Carolyn Roark of Mablevale, Arkansas. Graveside services will be held Wednesday, September 29, 2021 at 1:00 p.m. at the Fraternal Cemetery. Elder Todd Rice will be officiating.

Eula L. Jeffries, 93, went home to be with her Lord September 24, 2021. She was born in her parents&#8217; home near Stockton, Missouri, the oldest child of Lee and Esther (Metcalf) Cooper. She was saved in July, 1946 at Jerico Springs Missionary... View Obituary & Service Information

The family of Eula L Jeffries created this Life Tributes page to make it easy to share your memories.

Eula L. Jeffries, 93, went home to be with her Lord September...