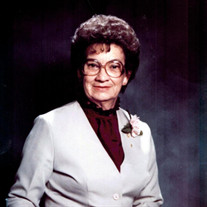 Ethel (Murison) Poole, a long time resident of Mansfield, WA, was born May 16, 1918 to James and Ethel Murison on “Glen Brae” Farm six miles north of Mansfield. She attended Mansfield School, graduating with the largest class ever, in 1935. She was employed at that time with the local telephone office, becoming chief operator in 1938. She and Gerald B. Poole were married on July 16, 1938 in Waterville, WA. They raised three sons and one daughter. During this time, she was active in the community as a local, county and state 4-H leader, a school bus driver and an Avon Representative for 47 years. She retired in 1994, after being employed at Campbell’s Restaurant for 16 years. She was a member of the Sunshine Club, Rebekah Lodge and the Museum Historical Society as Curator. In 2010, she was presented the Award of Merit and was Senior Citizen of the Year. She was caregiver for family and friends in Mansfield. She is survived by three sons: Gerald J. (Lynn), Gary D. (Pat), H. Thomas (Denise); and daughter, Yvonne Deeds (Denny); nine grandchildren, 16 great- grandchildren, and numerous nieces and nephews. She was preceded in death by her husband, Gerald B; her parents; one brother, George and three sisters: Ellen Gallaher, Mabel McLean and Margaret Smith. Visitation will be held Sunday, December 20, 2015 from 3:00-5:00 p.m. at Precht Rose Chapel. Funeral Services will be held on Monday, December 21, 2015 at 11:00 a.m. at the Mansfield School; to be followed by Graveside Services at the Mansfield Cemetery. Lunch will be served at the Mansfield School. Memorials can be made to the Mansfield Museum. Please share your thoughts and memories for the family at www.prechtrose.com. Services under the direction of Precht Rose Chapel, Chelan..

The family of Ethel J Poole created this Life Tributes page to make it easy to share your memories.