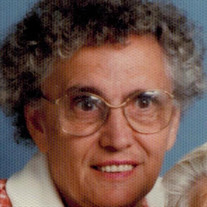 Esther Kirk, 94, a 68-year resident of Chelan, WA died Friday, March 25, 2016 at home following an extended illness. She was born Esther Oakes on December 21, 1921 at Wenatchee Heights to Charles and Effie Oakes. She attended school there and later at Wenatchee High School, graduating in 1940. The family moved to Wenatchee in 1942. Around this time, she met the love of her life, William Kirk on a blind date. Had dad not met a friend in Wenatchee who was dating her younger sister and persuaded him to date the older sister, they might never have met. Dad went into the U.S. Army in 1942, got engaged and on April 30, 1943 they were married in Wenatchee, WA. They lived in Texas and Louisiana until Dad was sent overseas in 1944. She then returned to Wenatchee and worked at Sears until late 1945, when Dad was discharged. Soon after, they moved to Chelan, WA. Mom was a loving wife and mother of three children. Barbara Kirk (Martin) born 1946, Phillip Kirk in 1950 and Roger Kirk in 1961. She loved gardening, reading and listening to country music. Mom was caring, forgiving and even tempered with the kind of inner strength only a woman has. Mom and Dad celebrated their 50th wedding anniversary in 1993. She was a volunteer at the Chelan Senior Center from 1994 to 2009. Mom was able to be saved by Jesus Christ near the end and was fortunate to pass away at home with family, as was her wish. Survivors include her son, Roger Kirk of Chelan; grandson, John (Jeanette) Martin of Bremerton; granddaughter, Theresa (John) Wardlow of Port Orchard; and son-in-law, Gail Martin of Aberdeen; one great-grandson; five great-granddaughters; Clara Kirk and Stan (Joyce) Kirk of Wenatchee and Larry (Sharon) Kirk of East Wenatchee. She was preceded in death by her parents; husband, William in 1993; son, Phillip in 1970; daughter, Barbara in 2008; and two sisters, Opal in 1918 and Gladys in 1991. Visitation will be from 3:00-6:00 p.m. Thursday, March 31, 2016. Services will be conducted Friday, April 1, 2016 at 1:00 p.m. at Precht Rose Chapel with Pastor Scott Morris officiating. Interment will follow at Fraternal Cemetery.

Esther Kirk, 94, a 68-year resident of Chelan, WA died Friday, March 25, 2016 at home following an extended illness. She was born Esther Oakes on December 21, 1921 at Wenatchee Heights to Charles and Effie Oakes. She attended school there and later... View Obituary & Service Information

The family of Esther Kirk created this Life Tributes page to make it easy to share your memories.