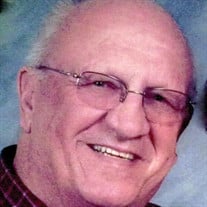 Our beloved Dad and Grandpa, Ernest George Robison, went home to be with the Lord on July 29, 2020 after a brief illness. Ernie was born October 12, 1935 in Wenatchee, Washington to Clayton Daniel Robison and Belle Grace (Cole) Robison. Ernie attended schools in Riverside, WA and graduated from Omak High School. He then attended college at WSU in Pullman, graduating with a Bachelor of Science in Horticulture. Ernie met the love of his life, Judith Carol Petersen, at Salmon Meadows Church Camp. They reconnected at WSU. Ernie was a member of Alpha Gamma Rho Fraternity and pinned Judy while in college to signify their engagement. They were married on August 18, 1957 in Waterville. After college, they moved to Wenatchee where Ernie worked as a Field Man at Skookum Co-op and then Northwest Wholesale. Ernie managed a small apple co-op in Entiat for a time. In the late 1960’s, he and Judy planted their first orchard at Howard Flats in Chelan. Soon after, they took over and expanded the family orchards at 25 Mile Creek and in the Chelan Valley where they lovingly raised their three children: Lynn, Dave, and Al. Ernie had a strong relationship with Jesus and he and Judy were very active in the Lake Chelan United Methodist Church. At the UMC, Ernie taught Sunday School, sang in the choir, and held several leadership roles in the church. He shared his deep abiding faith by example. Ernie was a member of the Lake Chelan School District Board and a long term director on the Blue Chelan Fruit Co-op Board. He also proudly served in the National Guard for several years in the 1950’s. Music was an important part of Ernie’s life. He played the banjo and violin as well as sang in the Apollo Club of Wenatchee. He and his wife, Judy, enjoyed riding their touring motorcycle on a variety of fun trips. Many fulfilling days were spent surrounded by the joy and laughter of their grandchildren and activities with dear friends. After many wonderful years together, Judy passed away in 2001. Later, Ernie was reacquainted with and married a dear high school friend, Jeanie Altizer, in Oroville. Ernie and Jeanie spent several happy years together in Oroville and Chelan. Ernie is survived by his wife Jeanie Robison of Oroville, his daughter Lyndelle Burkhart, son David (Karla) Robison, and son Allen (Rachel) Robison, all of Chelan, as well as four loving stepchildren: Mark, Cami, Amy and Jill. He’s also survived by a brother, Dan Robison of Sun City, AZ, a sister, Pat Davis of Puyallup, 12 grandchildren, 12 great-grandchildren and many step-grandchildren. Ernie was preceded in death by his parents, his first wife, Judy, two sisters, Olive and Betty, and one brother, Kenneth. Please leave any thoughts and memories for the family at www.prechtrose.com. Arrangements are by Precht Rose Chapel. A private family service will be held at a later date. Memorials may be made to: Lake Chelan United Methodist Church, P.O. Box 1236, Chelan, WA 98816.

Our beloved Dad and Grandpa, Ernest George Robison, went home to be with the Lord on July 29, 2020 after a brief illness. Ernie was born October 12, 1935 in Wenatchee, Washington to Clayton Daniel Robison and Belle Grace (Cole) Robison. Ernie... View Obituary & Service Information

The family of Ernest George Robison created this Life Tributes page to make it easy to share your memories.