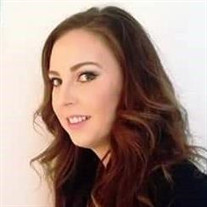 Erin Rae Shenyer was born on November 29th, 1994 in Brewster, WA. Erin lived in Brewster most of her life and lived with her mother and father Nicole and Kelly. Erin attended school in both Brewster and Pateros grade schools. She graduated with honors from Pateros High School in 2013. During her time at Pateros she enjoyed volleyball, fastpitch softball, cheerleading and time spent with her friends and fellow students. Following graduation, Erin worked for the United States Forest Service as a seasonal firefighter working out of the Chelan Ranger District on an initial attack fire truck. In 2015 Erin moved to Wenatchee where on her first night there, she met her husband to be, Isaiah Clifton. They spent their time hiking, traveling and spending time together with family or friends. They were always discussing their next adventures. Erin worked several different career choices during her time in Wenatchee including as a CNA at Mountain Meadows Senior Living, for a private in-home care facility and working for Elmview Disability Services. Erin even worked as a private nanny. Erin and Isaiah became engaged on December 24th, 2016 after Isaiah asked for hand in marriage in front of family and friends. They were married on October 14th, 2017. They continued with their traveling and business ventures and were always making plans for their future. Part of that future was to be parents. Later, they shared their planned parental futures with their families in December of 2017 when they announced they were pregnant with their first child. On September 08, 2018 Erin gave birth to their daughter, Gwenevere Lily Clifton. Erin’s love for her daughter was like no other. Erin was very proud of her little bundle of love. Erin and Gwenevere went to be in heaven on November 4th, 2018. They left us, so they could share space on a cloud in heaven. She is survived by her husband, Isaiah Clifton, her parents, Nicole and Kelly Hook, her brother Kinden Hook. Her maternal grandparents, Larry and Judy Shenyer, paternal grandparents Tom and Sherry Hook and numerous aunts, uncles and cousins. She was preceded in death by her brother, Austin, her grandmother Judy Hook, her great grandparents, two uncles and an aunt. Gwenevere was survived by her father Isaiah, maternal grandparents Nicole and Kelly Hook, paternal grandparents Laura and Tom Clifton, great grandparents, aunts, uncles and cousins. Erin and Gwenevere will be sadly missed by their family and friends here on earth. Funeral services will be held December 15th at 2:00 pm at Barnes Chapel in Brewster. A celebration of life dinner will be held after the services at the American Legion post in Brewster.

Erin Rae Shenyer was born on November 29th, 1994 in Brewster, WA. Erin lived in Brewster most of her life and lived with her mother and father Nicole and Kelly. Erin attended school in both Brewster and Pateros grade schools. She graduated... View Obituary & Service Information

The family of Erin Rae Clifton created this Life Tributes page to make it easy to share your memories.