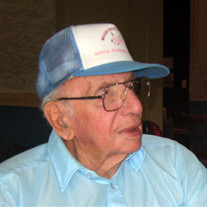 Elbert Arnold Hubbard, Sr., son of pioneer Manson Doctor I. G. Hubbard, died peacefully at Regency Manor, Chelan, on Monday, August 18, 2014, at 11:30 P.M. Born to Isaac George & Edna Morris Hubbard, June 5, 1914, in Ohlman, Ill, he celebrated his 100th birthday this June at the Manson Boat Club surrounded by family and friends. Elbert first arrived in Manson in the summer of 1918 with his brother Wes and parents who had purchased an apple orchard in the newly developed town. For 3 summers they traveled from Illinois by train to visit and explore until finally moving permanently in 1928. He started first grade in Manson school then continued his education in Ohlman and Nokomis, Ill. After making the move in 1928, he attended and graduated from Manson High School in 1932. For most of his working career he raised apples. He built and operated a packing shed with partner Don Petersen (Hubbard & Petersen's), which was later sold and is known today as Manson Growers. One winter during WWII Elbert worked at the Holden Mine. He also spent several memorable summers in the early 1960's as the Ranger at Lucerne and treasured the time working in the mountains, building trails and greeting tourists at the Lucerne Dock. Elbert married Aliene McKnight, August 15, 1934, and they raised 5 children, Elbert, Sandra, Gary, Duane & Jon. They were later divorced. In 1947 he purchased a mining claim of 20 acres on Lightning Creek, about 2 miles north of Lucerne on Lake Chelan. Over the years he made improvements to the cabin, including a power generating plant using water from the stream, indoor plumbing, hot & cold running water. Visitors there have all the “comforts of home” in a remote wilderness cabin. In October, 1970, Elbert married Frances Lane. Together they managed an apple orchard on Wapato Lake until retiring in 1977 when they built a home on Willow Point, surrounding it with gardens and beautiful flowers. In the winters they motorhomed to CA to visit her family. They spent many summers upgrading and enjoying the Lightning Creek cabin. “Hub's” hobbies included first Ham Radio, then e-mailing on his computer. He was a fierce competitor at dominoes, chess & croquet, showing no mercy to his young grandkid adversaries. He loved his dog, “Sassie”, and his semi-wild cats. Elbert was preceded in death by his wife Frances, brother Wesley, parents I.G. & Edna Hubbard and grandson Jeff McClellan. He is survived by his children: Elbert (Hannah) Hubbard, Jr., Sandra McClellan, Duane, Gary & Jon Hubbard and step-daughter, Linda (Jim) McKenzie; 14 grandchildren: Jerry & Jim (Donnitia) McClellan, Cindy (Jack) Deatherage, Rod Hubbard, Kim (Bob) Loomis, Lori, Brad (Janet), and Tara Hubbard, Camille Chriest, Todd (Kim) & Kevin (Jacquie) Hubbard, Michelle Watson, Wendy Hubbard and Jennifer (Moker) Motley, step grandchildren, Melanie Pulliam, Lori Giotta and Melissa Lane; niece, Charlotte (Bob) Rehpohl, & nephew, George (Wilvir) Hubbard, and numerous great and great-great grandchildren. At his request there will be no formal services. The family will have a celebration of life at a later date. All the family would like to express immense appreciation to Jon Hubbard and Nina Buhl who've been his loving caregivers and made it possible for Hub to live in his own home for as long as possible. Thanks also to the very professional and caring staff of Regency Manor who treated him with dignity and kindness in his final days. Memorials could be made to a charity of choice.

The family of Elbert A. Hubbard Sr. created this Life Tributes page to make it easy to share your memories.