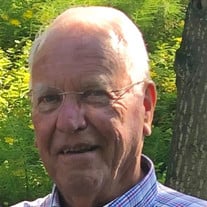 Edward A. Venneberg, 80, died Saturday, November 16, 2019 at his winter home in Sun City West, AZ. He leaves behind his son, Terry Venneberg and his wife, Jan Venneberg; his daughter, Lori Venneberg and her wife, Rozlyn Rouse; his son, Mike Venneberg and his wife, Tonya Venneberg; his grandsons, Ross and Cole Venneberg; his granddaughter, Ali Venneberg; and many close friends. Born and raised in Chelan, WA, the son of Alfred “Buster” and Rose (Crow) Venneberg, his life was spent enjoying homes in Washington, Alaska and Arizona. In his early years, Ed enjoyed growing up in a small town, surrounded by family, including his two sisters, Ellen and Celia. After graduating from Chelan High School in 1957, he enlisted in the Army, serving in active duty, followed by Army Reserve service until 1964. Ed also attended Wenatchee Valley College until marrying his first wife, Marjorie Weston, and moving to Seattle in 1959. Ed’s career in insurance began in Seattle, working for the Washington Surveying & Rating Bureau. In 1964, he went to work for Cravens, Dargen & Co., until moving his family to Sitka, AK in the summer of 1968. In Sitka, he started with Rushlow Insurance, then spent many years working for Corroon & Black/Dawson & Co. In 1977, he married his second wife, JoAnn Wright and expanded his family to include two step-daughters, Jennifer and Wendy Wilson. Ed took a huge leap of faith in himself in 1984, leaving his Seattle-based employer and starting his own agency in Sitka; Venneberg Insurance. He successfully grew his business for many years, finally retiring in 2000 and selling the agency to his son, Mike. Ed Venneberg had a passion for life in Southeast Alaska, enjoying the outdoors with family and friends. He hunted in the early years, but focused on his love of boating, fishing, crabbing and shrimping over the decades. On the water, he found his second home. A burial service will be held November 29th at Riverview Cemetary in Chelan at 2pm. In lieu of flowers, donations may be made to the Sitka Legacy Foundation.

Edward A. Venneberg, 80, died Saturday, November 16, 2019 at his winter home in Sun City West, AZ. He leaves behind his son, Terry Venneberg and his wife, Jan Venneberg; his daughter, Lori Venneberg and her wife, Rozlyn Rouse; his son, Mike... View Obituary & Service Information

The family of Edward A. Venneberg created this Life Tributes page to make it easy to share your memories.