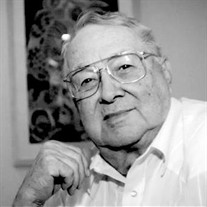 Edward Lyle Pariseau, 84, died April 27, 2015, at Central Washington Hospital surrounded by his family. Ed was born in Fargo, North Dakota on December 2, 1930, the first of five children born to John Elmer Pariseau and Katherine Yocum Pariseau. The family moved repeatedly during Ed’s youth: Fargo, Minot, Des Moines, Washington D.C., Prineville, Brewster and Kittitas. In Kittitas Ed met Venna Eve (Evie) Farnham, and they were married on September 15, 1951. During Ed’s single year in Brewster – his sophomore year – he met Danny Gebbers, who became his hunting and fishing buddy, and, later, business partner, and life-long friend. Prior to his senior year at Kittitas High School, his parent’s divorce found the Pariseau children essentially abandoned, and they were taken in by Emily Sorenson, who was raising a large family of her own. Ed supported himself through his senior year, and after a winter of hauling hay over Snoqualmie Pass in a semi-truck which gave a choice between using the headlights or the heater – but not both at the same time - wandered into the admissions office at Central Washington College of Education for information and emerged an enrolled student. Ed and Evie’s first child, Marianne, was born in Ellensburg. After receiving his degree in Education at Central, Ed and Evie both were hired by the Tonasket School District in 1953, where Ed taught Math and Physics until 1971, when they moved to Brewster to farm full time. Ed coached basketball and baseball in Tonasket, taking two basketball teams to the State A tournament in 1967 and 1969. Their second child, Dan, was born there in 1954. Taking a hiatus from teaching in Tonasket, Ed earned a National Science Foundation scholarship for his Master’s Degree, and he attended Notre Dame and Oregon State College, where he earned his M.S. in General Science in 1957. Their third child, John, was born in Corvallis. In 1958 Ed and Evie bought 20 acres from John and Martha Gebbers on Brewster Flat and planted their first apple orchard. For many years, Ed would teach during the day, then drive to Brewster to work till dark, then drive the 60 miles back to Tonasket. Ed and Evie didn’t really stop planting until 2014, when Ed’s health forced his retirement. Along the way, he and Danny Gebbers planted a partnership orchard, P&G Orchards – heavily skewed to Granny Smith – as well as eventually constructing downstream storage, packing and sales entities, together known as Brewster Heights Packing, Inc. (with key partners Richard and Harris Thomason). Ed served on the boards of the Washington State Apple Commission, the Northwest Horticulture Council, and was a founding board member of North Cascades National Bank. As one would expect of a man who was born during the dark days of the Depression and abandoned at a young age, there was more than the usual amount of steel in Ed Pariseau. However that just was cosmetic cover for his true nature: he was really just a big teddy bear of love. He loved Evie. He loved his brothers, John and Bill. He loved his children, Marianne, Dan, and John. He loved his grandchildren, Cass, Eddie, Nicole, Reagan, Danika, Grace, Danny, Joe, Johnny, Annie, and Marie. He loved to farm. He loved to “put apples in boxes”. He loved the key employees who helped grow his business, such as Gumesindo Churape, Al Cardenas, Isabel Fernandez, and George Wessling (and many, many others). He loved basketball. He loved Tonasket and the Tonasket Tigers and teaching math and physics. He loved Brewster. He loved the United States of America and its freedom. He loved to fly, especially in helicopters. He loved to hunt and fish – from epic arctic sheep hunting adventures with Danny Gebbers, to trying to bag the big mule deer on Bearcat Ridge with Danny, Mac, and Dan. He loved music and good food – especially steak, and the fare at Jim and Louise Swickard’s Café Bienville during its short but sweet run in Methow. He loved watching his brother John play basketball and baseball at the University of Washington during the 1950s; he loved watching his son John play basketball for Puget Sound during the 80s, and he especially loved watching grandchildren Danny and Reagan play basketball at Santa Clara and Arizona State respectively. He loved attending various other activities of his children and grandchildren – AAU and high school ball games, dance recitals, graduations, weddings, baptisms – the entire gamut of family life. He was determined to give his children and grandchildren a better upbringing than he experienced and in that most important endeavor he succeeded fabulously. Ed will be sorely missed by his family and friends: most acutely missed will be his active, restless, innovative, and creative intellect and his big, beating, awesome, loving heart. Preceding him in death were his parents. He is survived by his loving wife of 63 years, Evie, his children: Marianne (Russ) LeSage and their children, Cascade (Rachel Ferris) and Eddie; Dan and Candi (Bates) Pariseau and their children, Nicole (Matt) Crevier, Reagan, Danika, and Grace; John and Cathy (Gibbons) Pariseau and their children, Danny, Joe, Johnny (Ashley Fox), Annie and Marie. Services will be held in Brewster on June 20, 2015. Time and place to be announced at a later time, please check our website. Please feel free to leave your thoughts and memories for the family at www.barneschapel. com. Services are entrusted to Barnes Chapel of Brewster Remembrances may be made to the Wounded Warrior Project, PO Box 758517, Topeka, KS 66675

The family of Edward L. Pariseau created this Life Tributes page to make it easy to share your memories.