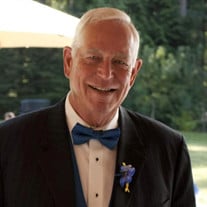 Edward Arthur La Mar of Manson crossed the finish line of this life into the arms of his Savior Jesus Christ Friday May 24th, 2019. Edd was born on February 17th, 1940 to Lonnie and Violet La Mar in Everett, Wa. He grew up and went to school in his home town of Mukilteo where he was a competitive swimmer from the age of 11. He graduated from Everett High School in 1958. Edd went of to swim at the collegiate level at Washington State University where he was also a member of the Lambda Chi Alpha fraternity (Go Cougs!). While at WSU he met the love of his life Sharon Coon (WSU, Delta Gamma) of Wenatchee. On June 22, 1963 the two lovebirds were married. In 1967 they had a son, Brett, and two years later came a baby girl, Amy. The family settled in the beautiful Lake Chelan Valley in 1969, and eventually made Manson their home. In what seemed a crazy move by the locals, Edd and Sharon decided to start a lumberyard in their little town of Manson. 40 years later, Lake Chelan building Supply stands as a testament to their hard work and service to the greater community of Lake Chelan. Their motto of “where customer’s become friends” lives on today in the halls of the business they worked so hard to build. Three generations of La Mar’s have, and are working there today. Edd was known for his honesty, his quick-dry wit, and hard work (usually with a bandana tied around his head as a sweat band). Edd was a great father, coaching many youth baseball and softball teams through the years. He and Sharon were heavily involved in community events throughout the Lake Chelan Valley. He was a State officer in the Jaycee’s organization, and was on the Manson Parks Board, and a volunteer EMT and firefighter. Edd also sat the on board of directors for the Western Building Materials Association for many years. He and Sharon were long time members of the Columbia Chorale Choir in Wenatchee. In later years, his competitive juices rekindled in the game of golf…he loved to golf. He and Sharon bought a place in Arizona on a golf course, where they spent their winters. Edd and Sharon were long time members of North Shore Bible Church in Manson, were he was an Elder. Edd’s faith was one of deeds, and few words. He cared for those around him with the resources he had, and the sweat of his brow, showing God’s love along the way. Many roofs, porches, wheelchair ramps and the like where installed without fanfare. He lived the love of Jesus through doing. Edd was proceeded in death by his Parents Lonnie and Violet La Mar, his wife Sharon La Mar, his brother Andy La Mar, and his daughter in law Sheri La Mar (Brett). He is survived son Brett of Manson and his wife Beverly and children Jared, Alyssa and Bryce. His daughter Amy Dobbs of Spokane and her husband Doug and children Mitchell and Sydney. Also his mother in law Anita (the late Norman) Coon of Manson, sister in law Karen (the late Jerry) Viebrock of Manson, and brother in law Rick (Rose) Coon of East Wenatchee. Nieces and Nephews: Cameon Viebrock, Debbie (La Mar) Thompson, Corinne (Viebrock) Biggar, Lonnie La Mar, Colleen (Viebrock) Miller, Renee (Coon) Stutzenberger, and Ryan Coon. Services will be held Wednesday June 5th at North Shore Bible Church in Manson at 3pm, graveside will proceed at 1pm at Chelan Fraternal Cemetery. En lieu of flowers please make a donation to the Lake Chelan Habitat for Humanity.

Edward Arthur La Mar of Manson crossed the finish line of this life into the arms of his Savior Jesus Christ Friday May 24th, 2019. Edd was born on February 17th, 1940 to Lonnie and Violet La Mar in Everett, Wa. He grew up and went to school... View Obituary & Service Information

The family of Edward La Mar created this Life Tributes page to make it easy to share your memories.

Edward Arthur La Mar of Manson crossed the finish line of this...