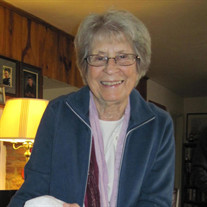 Dorthy Marie Gamble was welcomed into her Savior’s arms on May 31, 2021 at the age of 93. Dorthy was born to Arthur A. and Lulu F. Dezellem on May 27, 1928 in Methow, Washington, the middle child of three. Dorthy spent her childhood attending school in the Pateros School District where she would go on to graduate. She later attended Eastern Washington University for two years to study education. Dorthy met her future husband, Howard, at a dance in Pateros where he asked if he could drive her home. She thought that would be a good idea, and it led to them dating and eventually marrying in 1949. They made their lifelong home in Brewster, Washington and went on to have five children. While busy raising her active family, she was heavily involved in many outside activities. Dorthy worked in the Brewster Schools as a teacher’s aide and playground teacher. She also was one of the moms involved in beginning the ski bus program in Brewster. She then was employed by Gebbers Farms as a payroll clerk for many years and helped to institute the use of computers for completing the payroll. After leaving Gebbers, she went on to work at the Brewster Hospital for the remainder of her years of employment. Dorthy also worked with Howard in their family orchard moving water and helping with countless other jobs necessary to support their farm. Dorthy was a quiet leader, always supporting Howard behind the scenes in his very public life. She was always working to make Howard’s job easier, whether that be changing his diet when he began experiencing heart troubles or making him buy a new pair of pants for the Schwan’s salesman after Howard’s dog bit him. She was a calming influence to Howard’s slightly more outspoken personality, and they made an exceptional team together. Howard described Dorthy as an angel, and anyone who knew her would agree. She filled her leisure hours with numerous volunteer endeavors. She taught Sunday School at the Community Log Church for countless years and thoroughly enjoyed teaching young minds about God’s Word. This extended into many hours spent as a helper at Conconully Bible Camp as well. Dorthy loved her church family and could often be found preparing food for potlucks or other social gatherings and caring for the flowers around the building. She was always willing to help out with any special projects. Dorthy was a longtime member at the Brewster Senior Center, an active member of the Hospital Guild, and spent many hours mentoring community youth through the local school reading program. She loved sewing, cooking, and baking, and she was an avid reader of historical non-fiction and biographies. Dorthy was well known for her famous apple pies, and they were requested far and wide. It gave her much joy to keep her yard full of beautiful flowers, which the neighbors all loved. Dorthy could be found on her regular walking route every day for most of her life. She was very self-disciplined and self-driven and incorporated that into every area of her life. She also took the time to travel to visit family whether it be a trip to Santa Maria to visit her brother, Don, or a trip to Arizona to visit her daughter, Gini, and grandkids, or simply a relaxing trip to the west side to attend the Tulip Festival with her daughters. She was never overjoyed to leave, but enjoyed the experience while away, and was always happy to get back home. Throughout her entire life, she held an unwavering faith in God. Dorthy was a devoted woman who cared for those who needed it including her mother-in-law, Myrtle, and her brother-in-law, Robert, and later her husband, Howard. She never expected anything in return but always demonstrated God’s love to those around her. While she will be deeply missed here on earth, we know that she is finally home and celebrating with Howard. Dorthy is survived by her children, Nancy Gamble, Brewster; Gini Van Arsdell, Ogden, Utah; Kris Gamble, Brewster; Trudi Gamble, Brewster; daughter-in-law, Elaine Gamble, Edmonds; her grandchildren Dylan and Tessa Gamble, Brewster; Amanda and Andrew Gemmill, Spokane; Nick Van Arsdell, Ogden, Utah; Jared Gamble, Edmonds; Ashleigh and Bob Zutter, East Wenatchee; Jesse and Trista Dinjian, Port Orchard; and Taylor Gamble and Devin Goggins, Seattle; her great-grandchildren, Shea, Mia, Emma, and Maggie Gamble; Chelsea, Danikah, and Kirra Dinjian; Harper and Hudson Zutter; and Grace Gemmill. She was preceded in death by her father, mother, stepfather, husband Howard, brother Don, sister Marion, son Gil, grandson Will, and three infant sons. Memorial service will be held on June 26, 2021 at 11:00 a.m. at the Community Log Church with pie and ice cream to follow at the Annex. Please leave any thoughts and memories for the family at www.barneschapel.com. Services are under the direction of Barnes Chapel.

Dorthy Marie Gamble was welcomed into her Savior&#8217;s arms on May 31, 2021 at the age of 93. Dorthy was born to Arthur A. and Lulu F. Dezellem on May 27, 1928 in Methow, Washington, the middle child of three. Dorthy spent her childhood... View Obituary & Service Information

The family of Dorthy Gamble created this Life Tributes page to make it easy to share your memories.

Dorthy Marie Gamble was welcomed into her Savior’s arms on May...