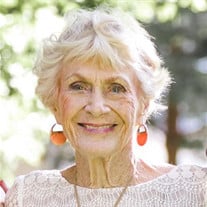 Doris Angell Miner passed peacefully from the loving arms of her family into the arms of her Lord and Savior on July 4th, 2015. Doris came into the world on March 12, 1927 at her parent’s home in Omak, Washington. She joined four older brothers, Norman, Buster, Fred and Johnny. Her parents, Edward and Doris Angell were delighted to have a little girl. She was the only daughter in the family with little brother Kenny joining her 4 years later. Being the only girl with 5 brothers was sometimes a blessing and a curse. They were loving and protective but oh how they delighted in teasing her! Big brother Johnny would tell his little red headed sister, the only true red head of the family, “Mom and Dad ordered you from Sears &Roebuck and they sent the wrong one!” Doris and her family moved to the Grand Coulee Dam area at the tail end of the Depression where her father, a Norwegian immigrant, was able to find consistent work as a laborer on the Dam. Doris loved the Lord, but a short second was President Franklin Delano Roosevelt whom she credited with saving her family during those very lean years. His endorsement of the construction of the highly controversial Dam resulted in the creation of thousands of jobs. The dam played a large role in every part of Doris’s life. She was a “dam” girl as she was fond of saying. Always bright, inquisitive and a voracious reader, Doris excelled at school and was advanced a grade in an effort to keep her challenged. After graduating in 1944, Doris went right to work at the Dam for the US Bureau of Reclamation in the secretarial pool. While she yearned to attend college she lacked the resources to continue her education. A dream she would fulfill later in life when her “nest” was empty. In 1949 James Miner, a young engineer, joined the office in which she worked. Very taken with Jim, the newly engaged Doris discreetly slipped her engagement ring off her finger and under her typewriter before meeting him. Her engagement ended shortly thereafter. Doris and Jim were married after a year-long courtship on Thanksgiving Day, November 23rd 1950. In 1956, Shelley Ann, the first of Doris and Jim’s three children was born. Followed by Lynn Angell in 1961 and James Henry Miner, III in 1964. Doris’s greatest joy and pleasure was being a mother. While her family was growing she participated in their lives fully as a creative room mother, Girl Scout Leader and Sunday school teacher at Coulee Dam Community Church where she was a member. Doris embraced life with enthusiasm. In addition to her family, she had a deep love for people, delicious food and any activity involving water. An accomplished homemaker and hostess she loved nothing more than to have many “happy” feet beneath her dining table. Her home was often full of her children’s friends as she was playful, inviting and warm. Doris was active in teaching swimming lessons to countless children for the Red Cross and gave her own kids daily opportunities to swim, picnic and enjoy the water with her. As her children began to leave the nest she worked professionally as a legal secretary, medical secretary and library assistant in the public school system illustrating her bright and adaptive mind. Bridge club, Bible Studies, her membership and friendships in PEO, and her much loved Tole painting group were things that Doris enjoyed immensely. In 1981, Jim passed away, followed by her son Jimmy 8 years later. In the course of 10 years Doris would lose 8 precious people. A large void was left in her life with each loss. Not to be defeated, Doris worked to overcome her grief and find joy again. Her faith and the birth of each of her precious grandchildren (the smartest and best looking babies on the earth she would say) did much to help her embrace her life. She was her grandchildren’s biggest fan, rarely missing a sporting event, piano or dance recital and any other activity that she could attend. Her playful and spontaneous nature made her game to do just about anything her grands invited her to do, including parasailing at 80, midnight skinny dipping at 81 and travel to Thailand at 84. She was great like that! When not enjoying family, Doris loved to travel, seeing many wonderful parts of the world. She also found ways to give back by volunteering in vacation bible school, the Chelan Public Library, Chelan Valley Hope and with CASA where she worked as a liaison with kids at risk. Doris led a rich and full life. Her beguiling sense of humor and spirit brought joy to those around her. Doris is survived by her daughter and son-in law, Shelley and Mike Wold and their children Luke and Lyudmila Wold, Emily Wold, and Beth and Tyler Allen; her daughter and son-in-law, Lynn and Paul Nelson and their children Eric Nelson and AnnAlise and Mike Huttula. The family would like to express their gratitude and appreciation to Elizabeth Moran and Isabelle Negrete who provided such loving care to Doris allowing mom to stay in our homes. Her life will be celebrated Monday, July 13th at 7:00 pm at St. Andrews Episcopal Church in Chelan. In lieu of flowers donations can be made to Chelan Valley Hope. Please feel free to leave any thoughts and memories for the family at www.prechtrose.com. Services are entrusted to Precht Rose Chapel of Chelan.

Doris Angell Miner passed peacefully from the loving arms of her family into the arms of her Lord and Savior on July 4th, 2015. Doris came into the world on March 12, 1927 at her parent&#8217;s home in Omak, Washington. She joined four older... View Obituary & Service Information

The family of Doris Angell Miner created this Life Tributes page to make it easy to share your memories.

Doris Angell Miner passed peacefully from the loving arms of...