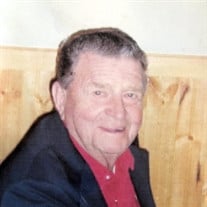 Donald “Ducky” Reese died peacefully at home on May 18, 2018 in Brewster, Washington at the age of 85. Don was born on June 23, 1932 in Coeur d’Alene, Idaho to Mary and Gilbert Reese. He was one of three children. In 1947 Don enlisted into the Army, serving four years in the Air Force, including a tour to Guam during World War II. Don was no stranger to hard work. For 50 years Don was a member of the United Brotherhood of Carpenters and Joiners of America, local number 96. He mostly worked in the hydro-electric field, he held many jobs as a Millwright Foreman over the years including working for Morrison-Knudsen of Douglas County, Allis Chalmers, Kaiser Aluminum Plant in Spokane, Fruin Coleman in Walla Walla, J.A. Jones Outage in Hanford, Quincy Chutes, Commercial Construction Corporation, Lundeen’s Inc. and Harder Mechanical, to name a few. As a Millwright, he worked on nearly every Dam in Washington State. He was most proud of his stator replacement at Grand Coulee Dam in 1997 with Siemens Corporation. He retired at age 72. He then married Jean Carden in 1966, settled and made their home in Brewster, Washington. Together they joined their families to include a daughter Tina along with Mary and Pat. Don and Jean fulfilled their dream and built a successful Charolais cattle operation. Side by side Don and Jean worked the alfalfa fields, bringing hay in for the cows, worked long nights during calving season and putting them out to pasture. This is where they built their legacy, to be passed down to their family. Together they enjoyed hunting, fishing, taking trips to the casino’s and being members of the local American Legion Post 97. Don is survived by his sister Rita Young of Pasco, daughter Mary Reese of Pasco, son Pat (Debbie) Reese of Alaska, son-in- law Danny Smith of Brewster, granddaughter Autumn (Victor) Garibay and daughters Lexi, Marissa, Alyssa, Gracie, and Audrina of East Wentachee, granddaughter Liz (Brendan) Smith and children Kemper and Makenna of Ritzville, grandson Craven Reese and son Tyler of Alaska, grandson Ryan (Darlene) Reese of Montana, granddaughter Azlynn (Bailey) Tabor and children Ella, Josh and Gracelynn of Alaska, granddaughter Amy (Levi) Brotherton and son Louis of Brewster, granddaughter Cameah (Cody) Smith of Brewster, grandson Silas Smith of Brewster. He is preceded in death by his wife Jean Carden Reese, daughter Tina Smith, brother Gilbert Henry Reese and parents Mary and Gilbert Reese Don was very much a simple man and made an impression on all those who crossed his path. In his later years, Don enjoyed his daily routine of feeding his herd of cats, trips to the “office” (American Legion), and spending time with his special friend Cookie and his purebred miniature Lab, Missy. He enjoyed spending time with his grandchildren and greatgrandchildren. He kept everyone on their toes with his witty sense of humor. He was the best of the best- father, son, grandfather, father-in-law, rancher, and friend. He is loved by many and will be greatly missed. A funeral is scheduled for Friday, May 25 at 10 AM at Barnes Chapel in Brewster. Graveside service to be held at Fort Okanogan, in Monse. Lunch will follow at the American Legion in Brewster. Visitation will be from 3PM-7PM, Thursday May 24 at Barnes Chapel in Brewster.

The family of Donald Gilbert Reese created this Life Tributes page to make it easy to share your memories.