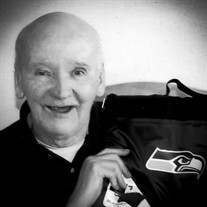 Donald James Quigley died December 13th, 2016 in Wenatchee, Washington. He was 84 years old. Don Quigley was born in Sharon Hill, Pennsylvania on April 4th, 1932. He joined the Air Force in 1955, and married Sara Mullen on February 15th, 1958. Don & Sara spent some of their first years together stationed at Clark Air Base in the Phillipines. He served as a fighter pilot and trainer during the Vietnam War. His children have memories of watching the Bob Hope Christmas Show from Vietnam and searching for their father on the small 13” TV in the living room in Sharon Hill! The children of Don & Sally were born at various locations in the United States as their father was stationed at different bases while in the military. Gerard was born in Philadelphia; Daniel in Falmouth, Mass.; Joseph in Portland, Oregon; Christopher in Outer Mongolia; and Mary in Boise, Idaho. Donald Quigley eventually settled in Boise, Idaho and he took up a position with the Air National Guard. His wife, Sally would take the kids outside to watch their dad dip the wing of his delta fighter to say 'hello' as he took off from the runway in Boise. He retired from the military fully in 1977. In 1978, Don and Sally moved their family to Manson, Washington and moved into the house next to their relatives, the Joe Mullen family, to keep an eye on their shenanigans. It was a full time job, but done with love. Don took a position with Campbell's Lodge as a night auditor and worked for the Campbell family for the next 20 years, retiring in 1999. The retirement party was so good that he signed on to work at Campbell's again and re-retired in 2006. He always cherished his time working at Campbell's Resort. He is survived by his wife, Sally, currently at Regency Wenatchee in Wenatchee, Washington; as well his sons Gerard, Daniel, Joseph, and Christopher. Don Quigley was a faithful member of Saint Francis de Sales Parish in Chelan, and attended each week until his nursing home relocated to Wenatchee earlier this year. There will be a funeral Mass for Donald James Quigley at Saint Francis de Sales Parish on Friday, December 30th at 11 am, reception to follow in the parish hall. A family rosary will be held the previous evening at 7 pm at Saint Francis also. All who remember Don and the family are welcome to attend either or both events as we celebrate our father, and offer his life up to God.

The family of Donald James Quigley created this Life Tributes page to make it easy to share your memories.