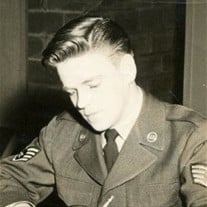 Don Michael Ellsworth of Pateros, WA died on Thursday July 10, 2014 at Three Rivers Hospital in Brewster, WA. He was 82. Don was born on January 1st, 1932 in Bergland Township, Michigan to Lester & Senia Ellsworth. He was one of nine children, survived by three brothers Richard, Jerry & Lester. Growing up his family moved in 1935 from Merriweather, Michigan to homestead in Palmer, Alaska. Ten years later they moved from Alaska to Kirkland, WA where Don graduated from Lake Washington High School. Don then joined the Air Force and after serving four years of duty moved back to Michigan where he married Greta Jean Kleimola in 1957. The married couple settled in Fall City, WA raising three children, Don Michael, Susan, and Darla, working for the postal service. The family moved to Coupeville, WA in 1972 where Don was the postmaster. He retired in 1982 and moved with his wife to Eastern Washington to be around family. Don loved to travel with wife Greta and spent many years being a snowbird in Arizona. Don loved to share stories, especially of his childhood memories and to discuss the latest political news. He loved to play cards and scrabble. He was funny, witty and young at heart. In later years he was given an Ipad, which opened his world to friends and family who were not near. He loved spending time on the phone with his eight granddaughters, finding out what they were doing and always making each one feel special. Don made everyone feel important and special. His happiest times were spent with his wife Greta, daughters, son and their families. He spent his retirement days with his wife caring for many of his grandchildren and at the time of his passing, his great grandchildren. His home was filled with laughter and love. His last hope was a granddaughter becoming a mom and he died with the knowledge that another great grandchild was due to be born on his birthday January 1st, 2015. Don is survived by his wife Greta, daughter Susan Libbey, daughter Darla Dietrich and son Don Michael Ellworth, 8 grandchildren, Brooke McGuire, Miryia Reagles, Vanessa Dietrich, Hannah Schlosser, Jade Dietrich, Sierra Ellsworth, Hailey Ellsworth, and Kendra Ellsworth, and 3 great grandchildren, Logan Michael McGuire, Morgan McGuire, and Berkley Reagles. There will be a viewing at Barnes Chapel in Brewster on Thursday July 17th from 5pm to 7pm. A graveside service will be held in Pateros Friday, July 18th at 1pm with a reception to follow at the home of his granddaughter Brooke McGuire.

Don Michael Ellsworth of Pateros, WA died on Thursday July 10, 2014 at Three Rivers Hospital in Brewster, WA. He was 82. Don was born on January 1st, 1932 in Bergland Township, Michigan to Lester & Senia Ellsworth. He was one of nine children,... View Obituary & Service Information

The family of Don Michael Ellsworth created this Life Tributes page to make it easy to share your memories.