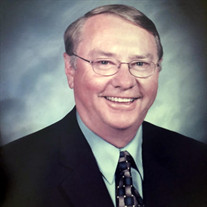 With a heavy heart, the family of David L. Macheel announces his sudden passing on Monday, April 23, 2018, at the age of 74. Dave was born February 12, 1944 in Breckenridge, Minnesota to Victor Otto Macheel and Doris Josephine Roalstad. He grew up on the family farm in Lidgerwood, North Dakota, going to school in a one room schoolhouse until high school. He graduated Salutatorian from Lidgerwood High School in 1962. He attended North Dakota State University and the University of North Dakota and graduated with a degree in Civil Engineering. He was then commissioned in March 1967. In June of that year, Dave married Judith Lueck and they had two children, Michael and Kimberly. He served in the Air Force for 30 years. He began his active duty at Elmendorf AFB in Alaska. He then served in Thailand, Germany, New Mexico, and earned his masters in Civil Engineering at the University of Missouri. When he left active duty, he joined the Air Force Reserves and served at Travis AFB in California and retired as a Lt. Colonel. He worked for the Veteran's Administration for 20 years as Chief Engineer of the VA hospital in San Francisco. He was awarded a National Award at a special presentation in Washington D.C. for his management in developing energy efficient systems, saving the government millions. After his wife's passing in 1982, Dave found love again and married Roxanna Ralphs in June 1986. Dave adopted Roxanna's children, Jessica and Rachel, and Roxanna adopted his, and the family became one, and enjoyed growing up in an obscure corner of Napa County. He commuted to San Francisco until his retirement. In the mid-90's Dave and Roxanna purchased property at Field's Point on the south shore of Lake Chelan. Upon retirement, they moved to Chelan to build their dream house on the lake, completing it in 2007. Dave was such a loving and giving man, and had a great dry sense of humor. Always willing to help others, you could call him for anything and he'd help in whatever way he could. He was an amazing strong man, both of character and physically. His quiet fortitude was always there. Whether he was working on the beach, cutting and moving wood, or getting into the water at all hours of the day or night, or season, to move a tree or log from the dock, he did whatever had to be done, without complaint. He was a hard worker and never a swear word came out of his mouth. He loved his yard and home, and prided himself in keeping his lawn green and beautiful. He loved to laugh and entertain. He loved being around friends and family and especially the grandkids, and could whip up the best blueberry pancakes. He enjoyed a good bottle of wine and going out, befriending all he would meet; or having a good cold beer and going bowling, having participated on the Wednesday Bowling League for years. He loved playing games, loved the camaraderie and being competitive as he quietly strategized. He loved playing ball with the grandkids and taking them boating on the lake. He was a curious man, always wanted to be in the know and loved to get phone calls from his kids. A quiet and thoughtful man, honest to a fault, fiercely private, his spirit and faith in God was strong and constant. He loved his family more than anything. A greater man would be hard to find. He will be sorely missed. He is survived by his wife of over 30 years, Roxanna; his children: Michael (Sonya) Macheel, Kimberly (Scott) Bartram, Jessica Roberts, Rachel (Christian) Tabarez; grandchildren: Kristin, Dani, and Hannah Macheel, Kaylee and Sarah Bartam, Andrew and Eric Roberts, and baby Tabarez to be; brother Joe Macheel, and other family: David (Evi) Ralphs, Dana (Deborah) Ralphs, Rita (Corey) Owens, Eugene Roberts, and numerous nieces and nephews. Rosary will be at Precht Rose Chapel in Chelan on Sunday, April 29, 2018 at 6 pm. Funeral services will be held at St. Francis de Sales Catholic Church in Chelan on Monday, April 30, 2018. Internment immediately follows at Fraternal Cemetery in Chelan, with full military honors. A reception for all will follow at the parish hall. In lieu of flowers, please send donations in Dave's name to St. Francis Catholic Church, Chelan, WA.

With a heavy heart, the family of David L. Macheel announces his sudden passing on Monday, April 23, 2018, at the age of 74. Dave was born February 12, 1944 in Breckenridge, Minnesota to Victor Otto Macheel and Doris Josephine Roalstad. He... View Obituary & Service Information

The family of David Lee Macheel created this Life Tributes page to make it easy to share your memories.

With a heavy heart, the family of David L. Macheel announces...