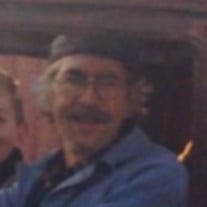 : David Lloyd Knowlton, 70, of Brewster, Wash., went home to be with the Lord on April 9, 2014 surrounded by his family at Central Washington Hospital, following a brief battle with lung cancer. David was born August 26, 1943 in Brewster, Wash., to John and Clara Knowlton. He grew up in Brewster and attended Brewster High School where he excelled at shop and participated in FFA. He graduated Brewster High School in 1962. David married Jackie Free on August 26, 1967. David and Jackie made their home at his family homestead, formerly known as the Town of Knowlton, on Paradise Hill in Brewster. David and Jackie had two children; Deanna Knowlton of Brewster and was preceded in death by their second unborn child, Melissa Knowlton. David worked as a mechanic for 14 years at Goehry’s Inc., a used car lot in Brewster. In 1974 David opened, Knowlton Machine Shop, in Brewster where he owned and operated his own welding business. David repaired equipment for local farmers and orchardists. Knowlton Machine Shop remained open until January of 2014 when David had to close down shop due to his illness upon the medical advice of his doctor. Throughout his lifetime, David enjoyed many hobbies and activities including his welding shop, cars, hot rods, and camping, spending time with his wife, Jackie and daughter, Deanna, as well as his grandsons, Austin and Justin Knowlton all of Brewster. He is survived by his wife, Jackie; daughter, Deanna; and grandsons Austin and Justin; his parents, John and Clara Knowlton of Brewster; all his siblings: Michael (Carol) Knowlton of Brewster, Harry (Patty) Knowlton of Brewster, Claudia (Ron) Winkler of Vancouver, Wash, and Randy (Sue) Knowlton of Brewster; and numerous nieces and nephews. He was preceded in death by his daughter, Melissa. There will be a celebration of life 1:00 pm, Friday, April 18, 2014 at Calvary Baptist Church. A potluck will be served at the church after the graveside service.

: David Lloyd Knowlton, 70, of Brewster, Wash., went home to be with the Lord on April 9, 2014 surrounded by his family at Central Washington Hospital, following a brief battle with lung cancer. David was born August 26, 1943 in Brewster,... View Obituary & Service Information

The family of David L. Knowlton created this Life Tributes page to make it easy to share your memories.