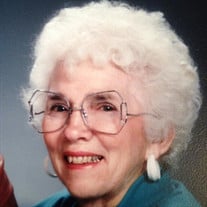 In loving memory of CoZette Marcelle Carpenter, our Mother, Grammy, and Great-Grammy, who passed away on Monday, February 5, 2018, Marcelle was born in Chelan, in her parent’s honeymoon cottage at First Creek, on January 10,1922, she was the oldest and last surviving child of Ralph M. and Zae D. (LaChapelle) Beckley. She went through Chelan schools, graduating in 1940, as salutatorian of her class. She attended Central Washington College in Ellensburg, with a major in nutrition, and enjoying her favorite sport… swimming and was part of the water ballet at CWC. Marcelle married her high school sweetheart, Virgil N. Carpenter, March 15, 1942, and they celebrated the 70th anniversary of their first date, in September 2009, three months before Virgil passed away. Marcelle and her husband owned orchards in Azwell, Howard Flats, and in the Boyd District. For many years she sold Avon that gave her an opportunity to visit her many friends, and make some new ones. She and Virgil also owned and operated Blue Spruce Realty in Chelan. She really enjoyed this job because she was able to get out into the community and help others achieve their dreams. Virg and Mar enjoyed travel and visited many places in the US, Europe, and Asia. They loved their animals, dogs, cats, and horses. She loved gardening, reading, music, and art. It’s hard to narrow down the words to describe her… she lived a full and wonderful life in her 96 years. She was a loving mother, Grammy, auntie, and a special friend and will be greatly missed by all who knew her. After retirement, Marcelle enjoyed writing, and she began researching family history. She wrote many stories that she shared with her family and friends. She belonged to the Chelan Valley Genealogy Society and a writer’s group, Writer’s Block. She also belonged to the Chelan Historical Society and enjoyed spending time at the Museum. She contributed a variety of articles that were published in the Chelan History Notes and she was sometimes referred to as the Honorary Chelan Historian. Marcelle is survived by her children, Thom (Laurie) Carpenter, IN; Margo (Mike) Howard, Woodinville; Connie (Gene) Hughes, Butte, Mt; and Ginny Beckley, Chelan. Grandchildren Stephanie (Terry) Randall, CO; Chris (David) Shannon, Ill; Melanie (Todd) Williams, Woodinville; Mollie (Jason) Johnson, LA; Trevor (Amy) Hughes, MT; Graham (Susie) Hughes, JBLM; Diana (Ryan) Beyer KY; and Nick (Christy) Beckley, Bothell; and Great-Grandchildren Xavier Williams, Woodinville and Zahara Williams, Seattle; Zane Thomas-Carpenter CO; Jack and Kate Shannon, Ill.; Autumn and Madison Howard, OR; Drake Robinson Johnson, LA; DJ and Riley Hughes; Cora and Zayla Beyer, KY; Jett Beckley, Bothell; and many loving nieces and nephews. Special thanks to Barb Bazner, Chelan, for her caring friendship. And remembering her special friend, Neil Petersen, Waterville. Marcelle was preceded in death by her parents, her husband Virgil, grandson, Mark P. Howard, granddaughter Cascade Beckley, great-grandson Justin D. Hughes; and her siblings, Carmen Riley, David Beckley, and Phillip Beckley. We are planning a celebration of life at the end of July.

In loving memory of CoZette Marcelle Carpenter, our Mother, Grammy, and Great-Grammy, who passed away on Monday, February 5, 2018, Marcelle was born in Chelan, in her parent&#8217;s honeymoon cottage at First Creek, on January 10,1922, she was... View Obituary & Service Information

The family of CoZette Marcelle Carpenter created this Life Tributes page to make it easy to share your memories.

In loving memory of CoZette Marcelle Carpenter, our Mother, Grammy,...