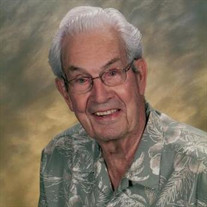 For a person who had worked hard all of his life, being 91 years of age was a challenge for Clyde W. Green. He was not accustomed to allowing others to help when he was not able enough. He has always been the strong one, the most responsible man. Clyde came to his final rest on July 9, 2017, in the Chelan Hospital. Born on a cold winter day, February 25, 1926, Clyde was the fourth son, after Archie, Virgil, and Everett, born to Mina (Hampton) and Harry Green. Clyde was born in the home that Harry had built in Tonasket, Washington. Harry was working in the woods, that day, logging, and the snow was deep. Harry asked the only person with a vehicle, if he could use it to go to town, as his wife was having a baby. The person refused, so Harry strapped on snowshoes and walked out of the woods, all the way back to Tonasket through the snow to be there. A sister, Hazel joined the family a few years later. Clyde’s grandparents had settled in the Tunk Valley to homestead where they staked claims for timber and mining, and they also farmed. Harry and Mina farmed, and were involved with the logging business. Clyde attended school in Tonasket and then Oroville, when the family moved. Clyde left high school to join the Navy during WWll, and completed his education after the war. Clyde attended boot camp at NTS Farragut, Idaho. He then sailed out of San Francisco Bay aboard his ship, a troop transport, the USS John Land, bound for the Pacific Campaign. He quickly realized that one of the areas of the ship he wanted to be on was what he called “above deck”. There was an open spot in the signal corp so he was given the study card deck for learning semaphore, visual morse code, and flaghoist signaling, and earned the position. He was a signalman for the duration of the war, attaining the rank of Signalman Third Class. Aboard the John Land, Clyde was involved in invasions of: Saipan, Tinian, Peleliu, Leyte, Luzon, and Iwo Jima. The John Land had the honor of carrying President Osmena of the Philippines who had been exiled for three years, and his Cabinet as they returned to the Philippines. Clyde was honorably discharged in Bremerton on May 23rd, 1946. Clyde met Aletha Payne, of Okanogan, at a dance, and they were married on July 25, 1948 in Okanogan. They made their first home in Portland Oregon, where their daughter Resa was born, and then moved to Wenatchee, where Clyde owned a gas station on 5th and Wenatchee Ave. Randy and Roger were born in Wenatchee. An opportunity to operate a Shell Oil Distributorship arose and Clyde and Aletha, moved to Chelan in 1953 where they remained for the rest of their lives. Clyde and Aletha owned and operated the Shell business, as well as raising their children. Clyde sold the business to son Randy in 1982 when he and Aletha retired. It was a source of pride for Clyde that Randy and his two sons have continued his legacy, as Green Petroleum. Clyde was a founding member of the Lake Chelan Lutheran Church where he filled roles of leadership throughout his years of faithful participation. He was a life long member of the Lake Chelan Lions, serving as President in 1974. Clyde also was elected to be a Lake Chelan School Board Member, and participated in the Lake Chelan Chamber of Commerce. Retirement was something that Clyde was not accustomed to, as he was always so task and goal oriented. To help to ease him into retirement, Clyde became partners with his daughter, Resa, in an apple orchard, where he returned to his early years of gardening and farming. Clyde and Aletha did enjoy traveling, and spent winters in Yuma, Arizona, also taking cruises, trips to Hawaii, Washington DC, historical sites, and North Carolina, and England. Always meticulous, Clyde discovered he possessed woodworking skills as he learned to be a wood carver, and has crafted beautifully carved figures to treasure. Clyde and Aletha Square danced, visited family and friends, and made new friends in their retirement years. With his Navy years in the past, Clyde did not often speak of his war experiences, as with many who had fought in WWll. After hearing of his shipmates having reunions, he contacted these men, and they were reunited. Clyde always carried a smile on his face, and a good sense of humor, seeing the good in situations and people. He was chivalrous and gentlemanly and respectful. He truly enjoyed his family, friends, people he met, his meals, taking walks, and making a good financial or business decision. The past year was one of deep sadness and loss for Clyde. Aletha passed in April 2016, followed soon after by his dear brother Everett, followed in April 2017 by Ev’s wife Jessica. Son Roger also preceded Clyde in death, as well as brothers, Archie, and Virgil. Clyde is survived by his sister Hazel, daughter Resa (Kerry) Glessner, son Randy (Sue) Green, and grandchildren, Jared, John J, Amelia, and Lucas, great grandchildren, Conrad, Breslynn, Grady, Cohen and Zeke, as well as extended family of sister in laws, cousins, nieces, nephews and devoted friends. Service to be at Lake Chelan Lutheran Church, 216 W Nixon, July 22nd, at 11:00 a.m. Casket will remain closed at the service. There will be military honors at the cemetery immediately following the service. Donations may be made to the Lake Chelan Lutheran Church, Box 1058, Chelan.

For a person who had worked hard all of his life, being 91 years of age was a challenge for Clyde W. Green. He was not accustomed to allowing others to help when he was not able enough. He has always been the strong one, the most responsible... View Obituary & Service Information

The family of Clyde Wilmer Green created this Life Tributes page to make it easy to share your memories.

For a person who had worked hard all of his life, being 91 years...