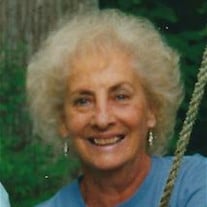 Our mother Christine Benson was a long-time resident of Eureka, CA and Bridgeport, WA. She passed away on January 6th 2016 in Brewster, Washington due to natural causes. In the past few years, she struggled with the effects of Alzheimer/Dementia disease. She was able to stay in her home thanks to the loving care of family and friends until the past 30 days when she moved into a care home. Mom was born in Mineral, WA and then moved with her family to Kentucky in the 1930’s where her father was a coal miner and she attended her first year of school. When she was 6 years old, her family returned to western Washington and settled in the town of Morton. She met our father Paul Benson in high school and they were married on October 14th 1947. They moved to California in the 1950’s where they lived until returning to Washington in the 1980’s. Mom was a homemaker, an excellent cook, and an avid athlete her entire life. As the only girl in a family with five brothers, she was tough and competitive from the start! She played most sports, including fast-pitch softball, volleyball, bowling and golf. She didn’t begin playing golf until after the age of 30 and became one of the best women golfers in the Humboldt County, CA and Douglas County, WA areas, winning several tournaments through the years and even holding golf course records. In 1963 she even won the National Pancake Race sponsored by Aunt Jemima that was held on Main Street of Disneyland! She was actively involved in various clubs and organizations and spent many years modeling for area retail stores. Mom had a passion for life and an energy that was contagious. She was very active, loved to tell jokes and to make others laugh, loved to dance, she loved her family and she had many friends. She was preceded in death by her husband Paul Benson and her brothers Cecil, Guy, Foister and Eugene Amburgy, and her grandson Garrett Benson. She is survived by her son Randy Benson and his wife Sue Hargrave-Benson of Chico, CA, Ric Benson of Bridgeport, WA; Todd Benson and his wife Lora Benson of Poulsbo, WA; Grandchildren Erika Benson-Davis, Taylor, Joshua, Juliana and Logan Benson; great-grandson Jules Davis; and brother Byron Amburgy. A private family celebration of life will be held in the spring of 2016 as she is laid to rest in Morton, WA. In lieu of flowers, donations may be made to the Alzheimer Organization to support the discovery of a cure for this terrible disease. Our family would like to thank the many friends and family members who have held us close in their hearts and prayers and who have provided encouragement and guidance during this period of care for our mother.

Our mother Christine Benson was a long-time resident of Eureka, CA and Bridgeport, WA. She passed away on January 6th 2016 in Brewster, Washington due to natural causes. In the past few years, she struggled with the effects of Alzheimer/Dementia... View Obituary & Service Information

The family of Christine Benson created this Life Tributes page to make it easy to share your memories.

Our mother Christine Benson was a long-time resident of Eureka,...