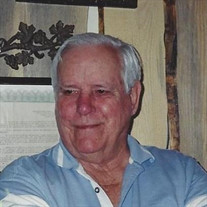 Charles was born October 27, 1930 in Fristoe, Missouri to Tony and Ella McClellan. He lived in Missouri until 1936 when his family moved to Manson and finally settled in Chelan in 1937. Charles attended Chelan Schools and graduated from Chelan High School in 1951. He was then drafted into the Air Force and served until 1953. On March 19, 1953 he married Lorene (Rene) Mae Webley and they began their life together in Spokane, WA while he attended Kinman Business School; graduating in 1954 with a degree in accounting. Also in 1954, their first child, Charles Douglas McClellan, was born on March 21st. Between 1954 and 1955 Charles took accounting jobs in Moses Lake and Chelan before moving back to Spokane where their second child, Linda Marie McClellan, was born on May 8th. In 1957, Charles took a job with Pacific Natural Gas in Longview, WA and the family lived there until 1960 before moving back to the Lake Chelan valley where Charles began his life as an orchardist, purchasing his first orchard in Manson and growing apples and cherries for the next 53 years. Over those 53 years, Charles along with his wife Rene, dedicated their lives to planting, replanting and nurturing their crops. Growing apples and cherries wasn’t just a career for him, it was a love. Charles also loved his family. He had 5 grandchildren and 13 great-grandchildren. All of his grandchildren can remember their “Papa” taking them to the Apple Cup for hot chocolate and for rides “out and about” as well as into the orchards he loved so much. He also loved traveling with his wife in the motorhome and drove to places like Arizona, Missouri, Oklahoma and Texas to spend the winters in a warmer locale. Some of his favorite places they visited were Branson, Missouri, The Cowboy Hall of Fame in Oklahoma City, and cities along the Pacific Northwest such as Florence, Oregon, Long Beach WA and Westport, WA. One of his favorite trips was when he traveled to Alaska to visit his nephew, Terry Spessard, where they fished for salmon on the Kenai River and visited many of Alaska’s beautiful sights. Charles was happiest when he was surrounded by his family and looked forward to the yearly family gatherings hosted at his and Rene’s home. Charles is survived by his wife Lorene ( Rene), of the home, Brother, Robert McClellan, Sister, Mary Svien, son and daughter-in-law Doug & Allison McClellan, daughter Linda McClellan, son-in law Robert Whitlam, Grandchildren: Jeremy McClellan, Shannon McClellan, Jason McClellan, Andrea(Parnell) Driver, Kaylin Whitlam, as well as his 13 great grandchildren and many nieces and nephews. He is preceded in death by his parents Tony and Ella McClellan and his grandson Brett Parnell. Memorial Services for Charles will be held on Thursday, November 20th at Precht Rose Chapel at 11am with a celebration of life gathering following services to be held at the upstairs banquet hall of the Eagles.

Charles was born October 27, 1930 in Fristoe, Missouri to Tony and Ella McClellan. He lived in Missouri until 1936 when his family moved to Manson and finally settled in Chelan in 1937. Charles attended Chelan Schools and graduated from Chelan... View Obituary & Service Information

The family of Charles C. McClellan created this Life Tributes page to make it easy to share your memories.