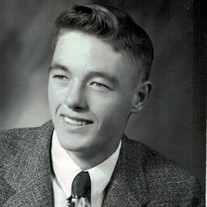 Charles Hammons, Jr., 82, Bridgeport, WA, passed away Sunday, November 29, 2015, at his home on Pearl Hill. He was born January 21, 1933, the son of Charles and Eula Hammons in Kline, CO. Charles was one of ten siblings and spent his early years in Durango, CO, before moving with the family to the Rice/Colville area, then settling in the Brewster, WA area. Charles graduated from Brewster High School in 1952, where he lettered in five sports his senior year. He served in the Army from 1953-55 at Fort Lewis, WA. He was a boxer in the Army and never lost a match. He settled in Brewster, WA, working for the Douglas County P.U.D and as an orchardist. He married Donna Kleinsasser and together they had two children, Rod and Renae. In 1972, he married the love of his life, Sharon Bennett, and added two step-daughters to his family, Cherrie and Cindy. He continued to work for the P.U.D. and raised cattle on Pearl Hill. Charles and Sharon had one daughter together, Shannon. Upon retiring from the P.U.D. in 1987, he built the family home and moved to Pearl Hill. Charles was an avid outdoorsman who loved hunting, fishing and his garden. He took great pride and joy in his grandchildren. Charles had a heart of gold and would give the shirt off his back for a friend. He was preceded in death by his parents, and seven siblings. He is survived by his wife of 43 years, Sharon, of the home; son, Rod Hammons, Brewster, WA; daughters, Renae (Dan) Frazier, Malaga, WA; Shannon (Dan) Cavadini, Pearl Hill, WA; step-daughters, Cherrie (Rod) Cool, Chelan, WA; Cindy (Steve) Huey, Brewster, WA; 14 grandchildren and four great-grandchildren and one on the way. Visitation will be Friday, December 4, 2015, from 3:00 p.m. to 7:00 p.m. at Barnes Chapel. Services will be held Saturday, December 5, 2015, at 11:00 a.m. at Barnes Chapel in Brewster, WA; interment will follow at the Bridgeport Cemetery. A potluck dinner will be held following the services at the Bridgeport Eagles. In lieu of flowers, donations may be made in Charles’ name to the Lewy Body Dementia Association (www.lbda.org). Arrangements by Barnes Chapel.

Charles Hammons, Jr., 82, Bridgeport, WA, passed away Sunday, November 29, 2015, at his home on Pearl Hill. He was born January 21, 1933, the son of Charles and Eula Hammons in Kline, CO. Charles was one of ten siblings and spent his early years... View Obituary & Service Information

The family of Charles Hammons Jr. created this Life Tributes page to make it easy to share your memories.