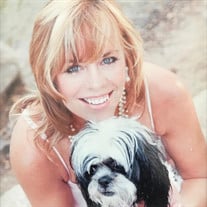 Cathy Christine Peratt (nee Gauman), age 54, was born in Oberlin, Ohio on August 29, 1965. She died in Chelan, WA. on August 18th, 2020 after a long illness. Cathy grew up in northern Ohio spending time on her grandparents’ farm in Lorain County and on the shores of Lake Erie in Vermilion. A 1983 graduate of Medina High School, she was an alumna of Ohio State University and the University of Phoenix. Cathy moved to the Denver area as a young adult and established a successful, 30-year career in the electronics, components industry. She excelled in sales, account management and customer service as an account executive with certification in Industrial Distribution. She represented firms including Thomas G. Goldkamp, Straube Associates, Sager Electronics, FedEx Services and California Switch and Signal in the Denver and Los Angeles areas. More recently she was employed by Colorado Floor Company and later managed Colorado Customer Enterprises. She is survived by her sister and brother-in-law Lynn Gauman and Bryan Lucas of South Kingstown, RI, a brother, Larry Gauman of Denver, a sister-in-law Debbie Gauman Schmid of Loveland, CO, two nephews, Chris Gauman of Loveland, CO and Jason Gauman of Fort Collins, CO, two nieces, Valerie Gauman Lucas of Los Angeles and Audrey Gauman Lucas of Providence, RI. She leaves behind several great nieces and a great nephew including Kryctil Gauman of Loveland, CO, and Sophia Gauman, Jaxon Gauman, Kloi Fox and Lily Lehtinen of Fort Collins, CO. In addition, Cathy leaves behind her dear friend of 30 years Christopher Hall of Kirkland, WA. She also is survived by her stepson Jason Peratt and her former husband Grant Peratt, both of Golden, CO. Cathy also leaves behind her beloved, constant companion, her Shih Tzu dog, Jasmine (Jasmina). Cathy actively volunteered in the Denver area for many years including her work with abused and neglected children as a Court Appointed Special Advocate (CASA) for Douglas County. Her CASA work included analyzing children’s needs and representing them to the court as well as mentoring children on a one to one basis. She engaged in fundraising for her stepson’s schools, for projects to assist the homeless and for Special Olympics. A celebration of life is being planned for the summer of 2021 in the Denver area.

Cathy Christine Peratt (nee Gauman), age 54, was born in Oberlin, Ohio on August 29, 1965. She died in Chelan, WA. on August 18th, 2020 after a long illness. Cathy grew up in northern Ohio spending time on her grandparents&#8217; farm in... View Obituary & Service Information

The family of Cathy Christine Peratt created this Life Tributes page to make it easy to share your memories.