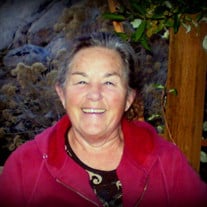 Today we are gathered in remembrance of Betty Mae Willis Swezey at 71 years old. As we mourn the loss of our mother, grandmother, sister, aunt, and sister in Christ, we also hold close to our hearts the blessing that she was to many. Betty was born on April 11th, 1944, to Cliff and Ruth Willis at Snohomish, Washington. She worked at the Pilchuck Drive-In, and graduated from Snohomish High School in 1962. While attending high school, Betty met the love of her life, Phillip Loren Swezey. They were united in marriage on August 10th, 1963, and made their home on the family farm. During this time, two sons were born to them, Gregory Phillip and Connery Lane. Betty was baptized in the fall of 1969, along with Phil, into the General Assembly and Church of the Firstborn. In the beginning of 1970, Phil and Betty moved their family to Tanget, Oregon, where they were blessed with a daughter, Dana Marie. They then moved to Halsey, Oregon, where their son, Christopher Aaron, was born in 1971. Phil and Betty made the move to Brewster, Washington in 1973, and enjoyed raising their family there. During this time, a son, Stephen Lee, and a daughter, Jenny Ruth, completed the family. Some of the hobbies Betty enjoyed were quilting, gardening, and doing crafts. She spent many hours quilting, and was able to make a quilt for every one of her grandkids. Phil and Betty loved taking their children to campouts and traveling amongst the brethren. They also enjoyed camping at the fair with their children and grandchildren. Betty loved going to Alta Lake with her family, where they spent many happy hours. She devoted herself to being a wife, mother, and grandmother, and gave us all lots of precious memories. She had a special way of comforting the sick, and was also known for her hospitality. Her efforts in this were extended to many. Helping and caring for others was important to Betty, and she will be remembered by those whose lives she touched. Betty was preceded in death by her husband, Phillip, granddaughter, Ashley Nicole Swezey, grandson, Zachery Cole Swezey, her parents, Cliff and Ruth Willis, sisters, Carol Stevens and Jeannine Pichler, brothers, Ron Willis and George Willis. Betty is survived by four sons; Greg and his wife, JaLea, of Carlton, Washington, Conn and his wife, Nancy, of Brewster, Washington, Chris and his wife, April, of Brewster, Washington, and Stephen, of Brewster, Washington; two daughters; Dana Sweet, and her husband, Joe, of Welling, Oklahoma, and Jenny Piechalski, and her husband, Clay, of Brewster, Washington, fifteen grandsons, six granddaughters, two granddaughters-in-law, five great-granddaughters, one brother; Jack Willis, and one sister; Dee Pace, many nieces, nephews, cousins, and a host of brethren and friends. She was greatly loved, and will be deeply missed by all.

Today we are gathered in remembrance of Betty Mae Willis Swezey at 71 years old. As we mourn the loss of our mother, grandmother, sister, aunt, and sister in Christ, we also hold close to our hearts the blessing that she was to many. Betty was... View Obituary & Service Information

The family of Betty Mae Swezey created this Life Tributes page to make it easy to share your memories.

Today we are gathered in remembrance of Betty Mae Willis Swezey...