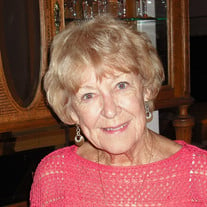 Betty Jeanne Mollet, 79, of Chelan, WA, went to be with her Lord on July 21, 2014, after many years with a rare blood cancer. She was born Betty Jeanne Dahl in Meadow Lake, Saskatchewan, Canada to Martin & Gladys Dahl. The family, including her five brothers, moved to the Yakima Valley when she was two years old. After several years owning a fruit ranch, the family moved to Selah, WA when Betty was twelve years old. It was there, on the playground, that she met her future husband. Little did they know what lie in store for them. Betty attended school in Selah and graduated from Selah High School in 1953. She then worked for a bank in Yakima, WA for one year. On June 12, 1954, she married Donald Mollet. They then moved to Seattle where Don attended college and Betty worked as a bookkeeper. On March 11, 1955, they were blessed with a son, David and on February 10, 1958 with another son, Douglas. While the boys were young, Betty worked as a bowling instructor at Village Lanes in Seattle. From there, she worked for an architectural specialties company, Barkley Dean, Inc. calling on architects. A company in Salt Lake City later hired her to be the regional Sales and Marketing Manager. After several years, the traveling became too much so Betty ended her career at Barclay Dean Architectural. In 1992, they retired to Chelan, WA and Betty became involved in the ladies golf group. This led to being appointed to the Lake Chelan Golf Course Board and later the president. She was a member of Lake Chelan Hospital, Guild B and was involved in helping with establishing a Christmas Lighting program fundraiser, “The Lights of Love”. She was very active in Lake Chelan Lutheran Church, helping with communion, decorating and assorted projects. Betty is survived by her husband, Don, son Doug Mollet and wife Mary Jo Dedomenico, granddaughters, Christine Mollet, Laura Mollet, and ‘bonus’ granddaughters, Celeste Goakey, Jessica Goakey, and great granddaughter, Hailey Jeanne Mollet. Also, many nieces and nephews that were very special to her. She is preceded in death by her parents, Martin and Gladys Dahl, son David Mollet, brothers, Elmer, Don, William, Richard and Glenn Dahl. Betty has been identified by her friends as the Energizer Bunny, a classy lady and a good friend. She will be missed and will leave an empty feeling in the hearts of all of us that were so close to her. Betty will now live in the house of the Lord forever. Services will be held at Lake Chelan Lutheran Church, 216 W. Nixon Ave, Chelan, WA 98816 at 11:00 AM on July 30, 2014 with Pastor Palumbo officiating. A reception will follow at Campbells Resort. Memorials may be made to Lake Chelan Lutheran, Hospital Guild B Lights of Love or Home Health and Hospice of Chelan Funeral arrangements are by Precht Rose Chapel in Chelan. Please feel free to login to www.prechtrose.com and leave any memories and condolences for the family there.

Betty Jeanne Mollet, 79, of Chelan, WA, went to be with her Lord on July 21, 2014, after many years with a rare blood cancer. She was born Betty Jeanne Dahl in Meadow Lake, Saskatchewan, Canada to Martin & Gladys Dahl. The family, including... View Obituary & Service Information

The family of Betty Jeanne Mollet created this Life Tributes page to make it easy to share your memories.