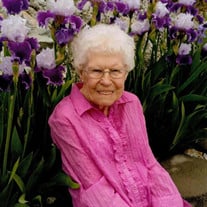 Betty A. Johansen joined her beloved husband in the celestial realms when she passed from this physical world on Monday evening, August 29, 2016. Born in Somers, Montana in 1922, Betty’s childhood was spent on Flathead Lake and later in the small lumber town of Bonner, Montana. She graduated from Missoula High School in 1940 and attended a year of business school in Spokane, WA. She returned to Bonner to work as a receptionist at the Anaconda Lumber Company where she met Chris Johansen at a dance and they married 6 months later in 1942. Betty was a war wife as her husband spent two years in the South Pacific during WWII. She gave birth to 3 daughters while living in the small rural town of Reserve, MT. Moving to Great Falls she became librarian at the Great Falls High School followed by secretary for federal programming at the Great Falls School District. Betty retired at the age of 67 and became a breast cancer survivor while enjoying traveling, Elks, and Sons of Norway activities along with continual church involvement at Faith Lutheran Church in Great Falls. Betty became a widow in 1993 and eventually moved to Washington state to be closer to her family, enjoying her summers at Lake Chelan and her winters in Wenatchee. She was an avid walker, and enjoyed reading books, bird and wildlife watching, growing flowers, and watching her favorite TV programs, Jeopardy, Wheel of Fortune and Dancing With the Stars. Living in Washington, she became an avid Seahawks fan and donned her Seahawks attire for every game. Betty’s generous and humble spirit helped to mold the lives of many. She is survived by her brother and sister-in-law, Richard and Gale Krum, her 3 daughters, Marilyn Johansen, Hannah Johansen, Sandra Johansen, 4 grandchildren and 6 great grandchildren as well as her extended family, Ned Verellen, Jeri Payne and Chloe Corlett. A small family memorial was held at The Chelan Lutheran Church in Chelan, WA. Donations in Betty’s honor can be made to the following: Nathanael Lutheran Church Cemetery Maintenance Mary Sampsen Dagmar MT 59219.

Betty A. Johansen joined her beloved husband in the celestial realms when she passed from this physical world on Monday evening, August 29, 2016. Born in Somers, Montana in 1922, Betty&#8217;s childhood was spent on Flathead Lake and later... View Obituary & Service Information

The family of Betty Arlene Johansen created this Life Tributes page to make it easy to share your memories.

Betty A. Johansen joined her beloved husband in the celestial...