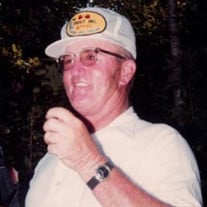 Ben Eugene Smalley, 84 of Manson, passed away Monday, November 04, 2019. He was born to Rosylyn (Clyma) Smalley and Ben C. Smalley in Ukiah, CA on August 23, 1935. Ben graduated from high school in Geyserville, CA in 1955 and worked in the logging and sawmill industries before moving to Seattle in 1970. There he worked as a mechanic and gas station manager. He married Elaine Miller on January 30, 1972. They moved to Manson shortly thereafter where he worked on the family orchards for the next 40 years. Ben loved the outdoors and spent many days in the late fall deer hunting with family and friends. He also loved to collect model cars. Working outdoors brought him great pleasure and he always got the job done. He was a 35 year member of the Manson Kiwanis Club where he served as president twice. Ben volunteered many hours for Club projects particularly Chicken BBQ and Apple Blossom Festival Pancake Breakfast where he was the pancake batter mixer for many years. Ben and Elaine were great supporters of the Manson schools. For many years they never missed a home football, basketball or volleyball game. They also attended many far away games, particularly when their niece and nephews were playing. They received several Super Fan Awards from the students for their great support of school events, including athletics, band, drama, Apple Blossom and graduation. They were also honored at the Manson Apple Blossom parade Grand Marshall in 2003. Also, the 1999 High School Annual was dedicated to them. Ben was proceeded in death by parents Ben C. and Rosylyn, brothers Kenneth, Clifford, Donald and sister Blanche. He is survived by wife Elaine, brother Ted Smalley of Springfield, MO, sister Marriam Kinion of Ukiah, CA, sister Darlene King of Prescott, AZ, half brother Frank Stipsky of Las Vegas, NV, sons Wayne of Chelan and Clifford of Ukiah, CA, and daughters Debbie and Jeanie of Santa Rosa, CA, four grandchildren and six great grandchildren. A Memorial Service and celebration of life will be held on Saturday, November 23 at 2:00 P.M. at Manson High School gym. A reception will follow in the High School commons area. All are invited. Friends and family are welcome to leave any thoughts and memories at www.prechtrose.com Services are entrusted to Precht Rose Chapel of Chelan. For any that wish to make a donation in his memory, the Manson High School ASB and Lake Chelan Community Hospital were his favorite organizations.

Ben Eugene Smalley, 84 of Manson, passed away Monday, November 04, 2019. He was born to Rosylyn (Clyma) Smalley and Ben C. Smalley in Ukiah, CA on August 23, 1935. Ben graduated from high school in Geyserville, CA in 1955 and worked in the logging... View Obituary & Service Information

The family of Ben Eugene Smalley created this Life Tributes page to make it easy to share your memories.