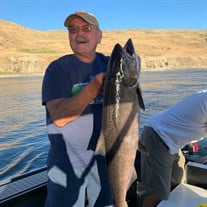 Benjamin Charles Higgins passed away on Thursday, November 18, 2021 at his home in Chelan with his family near his side. Ben died from IPF (Idiopathic Pulmonary Fibrosis). Ben was born on February 7, 1947 to Lyle Beecher and Hazel Lucille (Nichols) Higgins in Wenatchee, Washington. Ben grew up and attended school in Chelan, graduating from Chelan High School in 1965. He told many unforgettable tales about his school days and escapades. Ben attended Yakima Valley College from 1965-1967, where he met his future wife, transferring to Western Washington University from 1967-1969, then to the University of Washington graduating in August 1970 with a Bachelor of Fine Arts Degree. He married Jo Ann Richartz in Yakima, Washington on March 21, 1970. They lived in Seattle and Bellevue, Washington Ben began his Real Estate career in Bellevue, working for Shannon O’Neil in Newport Hills. In 1972, his grandfather C.O. Nichols, called him and told him that Kenny Kingman was thinking of selling his Real Estate business, so Ben came back to Chelan, bought the business from Kenny and Chelan Realty became his lifetime career in the Chelan Valley. Ben was one of the pioneers in establishing the Chelan Co-Brokers Association under the guidance of the Wenatchee Board of Realtors. He was active in the Chelan Chamber of Commerce, was a Chelan City Councilman, a member of the Chelan Snowmobile Club and a member of the Lake Chelan Golf Club. He was an avid hunter and fisherman and a member of Ducks Unlimited, which he promoted in the Chelan Valley. Ben was an artist at heart and had an amazing talent at carving and painting duck decoys from a block of wood. He also enjoyed purchasing houses and remodeling or fixing them up to become rentals or homes to resale. He was active in real estate in the Lake Chelan valley until 2021 when he sold Chelan Realty to two of his children, Jon Higgins and Laura Clinton. They are carrying on where he left off. Family was extremely important to him. Ben and Jo never missed a Goat game, home or away, for their children (football, volleyball, basketball, baseball, softball, track and field). They continued to travel and support athletics with their grandchildren. Ben’s biggest love and passion was his wife and family. Ben and Jo were together for 55 years and married for 51 years. Ben is survived by his wife, Jo Ann, their four children. Son, Pat (Lani) Madden of Gig Harbor, WA; son, Jonathan Higgins; daughter, Jenifer (Rob) Rainville; and Laura (John) Clinton all of Chelan, WA. He has 10 grandchildren, Cole (Celina) Madden, Aaron Madden, Aislinn Pai, Alika Pai, Tyler Higgins, Miles Higgins, Katie Rainville, Ryan Rainville, Carson Clinton, Hallie Jo Clinton, and one great-grand daughter, Elsie Madden. He is also survived by his brother, James (Suzanne) Higgins; his two sisters, Kay (Buck) Frymier and Toni (Ron) Berry. Many nieces, nephews and many, many friends. He was preceded in death by his parents, Lyle B. and Hazel Higgins; his grandparents, Charles O. and Mamie Nichols; William R. and Etta Higgins. A Celebration of Life will be held on December 4, 2021 at Campbell’s Resort from 1-3 p.m. in the Centennial Ballroom. A private family ceremony will be held in Stehekin in Spring 2022. Services are entrusted to Precht Rose Chelan. Please leave your thoughts and memories of Ben at www.prechtrose.com

Benjamin Charles Higgins passed away on Thursday, November 18, 2021 at his home in Chelan with his family near his side. Ben died from IPF (Idiopathic Pulmonary Fibrosis). Ben was born on February 7, 1947 to Lyle Beecher and Hazel Lucille... View Obituary & Service Information

The family of Ben Higgins created this Life Tributes page to make it easy to share your memories.