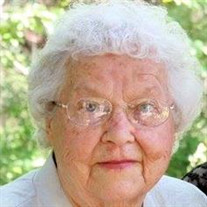 Barbara Ann Stanley passed away peacefully, and joined her husband, Henry Stanley, and son, Raymond Stanley, as well as our Lord, on February, 8, 2020, at the age of 90, with loved ones by her side, at Good Samaritan in Greenacres, WA. Barbara was not known to many by her name. To those who knew her best, she was “Nana.” Barbara was born in Lake City, IO, to Earl and Ida Bowles. She was one of five sisters: Marie, Maxine, Marylou, and Donna. At the age of four, her family moved to Bridgeport, WA, where she attended school in Brewster, WA. This was where she met her husband of 55 years. The two moved to Pateros, WA, and resided there, starting their lives, and raising their five children. Barbara worked in the local packing sheds several years, along with being a housewife, and raising their five children. She loved preparing holiday meals and having all her family together, while making her fruit pies from scratch, and lining them on a table for everyone to enjoy. She had the brightest blue eyes, a giggle that was contagious, and a smile that would light up any room. She attended the Brewster Assembly of God church and was a member of the Brewster Senior Center, where she spent many days of visiting, and being with her childhood friends. She loved to crochet and make all kinds of needlecraft, that she enjoyed sharing. The family spent many weekends camping, fishing, and being out in the woods. Barbara is survived by her children: Roger Stanley, Elaine Davis (Steve), Janis Chastek (Tom), and Connie Labree. She had ten grandchildren and six great-grandchildren who adored her immensely. She was preceded in death by her husband, Henry; son, Raymond; and two sisters: Marie and Donna. A Celebration of Life will be planned in the late spring or early summer. Please feel free to add any comments for the family at www.barneschapel.com. Services are provided by Barnes Chapel of Brewster, WA.

Barbara Ann Stanley passed away peacefully, and joined her husband, Henry Stanley, and son, Raymond Stanley, as well as our Lord, on February, 8, 2020, at the age of 90, with loved ones by her side, at Good Samaritan in Greenacres, WA. Barbara... View Obituary & Service Information

The family of Barbara Ann Stanley created this Life Tributes page to make it easy to share your memories.

Barbara Ann Stanley passed away peacefully, and joined her husband,...