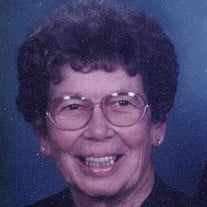 Barbara June Ramella, 85, longtime resident of Chelan, passed away on Friday March 6th at Central Washington Hospital. Barbara had spent the last four remaining years living in Wenatchee, WA.. She was born June 23, 1929 in Huntington Park California to Roy and Lavinia (Crowell) Campbell. She was raised in Long Beach, CA.. Barbara attended Polytechnic High School in Long Beach where she met her husband Gene. They married March 12, 1949. She attended Santa Maria Jr. College near Los Olivos, CA. and studied math and accounting. Barb and Gene bought their first home in Long Beach in 1949 where they raised their family and resided for 44 years. Barbara served in a secretarial position at Long Beach Unified School District for four years prior to starting a family. After raising her family she returned to the work force in the accounting department at Salen Shipping Agency in the Long Beach harbor. Barbara and Gene moved to Chelan, Washington in 1983 where Gene build their home and where she remained until September of 2010. Barbara then resided at Riverwest Retirement Community in Wenatchee. Throughout her married life she enjoyed ballroom and square dancing. She was a member of the Chelan Eagles and also attended St. Andrews Episcopal Church. Her proudest accomplishment was the important role of wife, mother, and grandmother. The moments spent with her family gave her the greatest joy in her life. While residing in the Chelan Valley, Barb enjoyed time with friends and spending many happy summers with her children and grandchildren at the lake front. She was preceded in death by her husband Gene and one brother Tony. Survivors include her children Jim (Linda) Ramella of Chelan, Julie (Bob) Exton of Mt. Airy, MD, Susie (Bill) Fenton of Manson, and her grandchildren James, Thomas, Katy, Melissa, Kevin, and Amanda as well as Great-grandchildren Wyatt, Lucy, and Cote. Our special and loving “Baba” will be greatly missed by her friends and family. A private family graveside service will be held Monday, March 16th with Rev. Linda Mayer officiating. This will be followed by a public memorial reception at St. Andrews Episcopal Church fellowship hall at 12:00 noon and all are welcome. Donations in her memory may be given to the lake Chelan Community Hospital and Home Health and Hospice.

The family of Barbara June Ramella created this Life Tributes page to make it easy to share your memories.