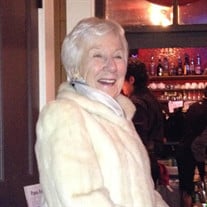 Barbara Jean Peterson passed away peacefully in her home on Saturday, July 8th 2017, but will live on in legacy for those of whom Jean’s brilliant spirit touched. Among her lifetime of achievements, Jean was a devoted wife and mother, adored Nana, steadfast friend and inspirational teacher. Born in Amarillo, Texas on May 29, 1929, Jean migrated to Manson when she was 4 and Manson was still a frontier town. Those were not easy times, but Jean helped raise her younger sister and brother with a determined grit that would define her character. As a young woman, her intelligence, integrity and charisma bloomed. Jean was Valedictorian of Manson High School’s class of 1947, a Rainbow Advisor and the first Manson Apple Blossom Queen to lead the parade (Queen Jean was a role that would stick). Her bright, curious mind took her to the University of Washington to study science and her heart brought her back again to Manson to marry her childhood sweetheart, Dale Peterson. Dale and Jean worked hard to carve out a home and orchard on Manson's farthest edges and started their own family. Enriched by their hospitality, joyous memories and wild beauty, their “homeplace” became a destination held in spiritual reverence by family and friends. When her children were school age, Jean earned her teacher’s certificate and taught high school chemistry and biology in Manson and Lake Chelan where she achieved the levels of respected infamy that result in being stopped in the streets decades later by former students. “You were my favorite teacher. [Healthy pause.] Tough… but fair.” Dale and Jean were solid fixtures in the Manson community and frequently celebrated life with their tightly knit social circle. She was also a prolific cook, inspired gardener, savvy bridge partner, avid reader, stylish shopper and occasional skinny dipper. Jean eventually retired from teaching to help Dale with their growing orchard and the two enjoyed traveling across the globe on various agricultural expeditions and spending time with their grandchildren. Her family dinners involved multiple generations gathered in appreciation for one another and lively discussions on an unlimited range of topics. Her overall interest in life provided constant conditioning of her mental agility, which she would feistily evidence if deemed necessary. After Dale passed away, Jean continued to run the orchard until the very last of her days with the same tenacity and focus that powered her throughout her amazing life and drew us all to her. Jean was preceded in death by her husband, Dale and her son, Arthur Bradley Peterson. She is survived by her daughter, Kim Peterson Ozolin and her son, Allen Brooke Peterson, as well as her grandchildren: Mara, Erik, Brett, Katie, Kelsey and Kevin, great-grandchildren: Maksims, Charles and Benecio, and also by Jose Alejo, who was her longtime orcharding partner and honorary member of the clan. The family will be holding a celebration of Jean’s life at the Lake Chelan Senior Center on Saturday, July 29th from 11:00 am to 1:00 pm. All that counted Jean as a friend are invited to come share your favorite Jean memories over a glass of Pinot Gris with ice cubes. In lieu of flowers or contributions (and in recognition of Jean's independent spirit), please make a donation to a cause important to you.

Barbara Jean Peterson passed away peacefully in her home on Saturday, July 8th 2017, but will live on in legacy for those of whom Jean&#8217;s brilliant spirit touched. Among her lifetime of achievements, Jean was a devoted wife and mother,... View Obituary & Service Information

The family of Barbara Jean Peterson created this Life Tributes page to make it easy to share your memories.

Barbara Jean Peterson passed away peacefully in her home on Saturday,...