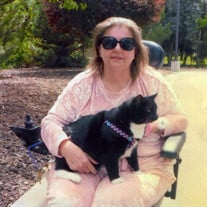 Barbara Jo Jackson, 53, was born on July 27, 1967 in Seattle, Washington, and passed away on Dec. 9, 2020 at Blossom Valley in Wenatchee, Washington, where she had lived since 2018. Barbara attended schools in Manson, Washington and Seattle, where she graduated from Foster High School. After doing low paying jobs, she spent one summer on a fishing boat in Alaska, which she hated. She decided to further her education at Highline Community College, in Midway, Washington, where she received her AA. She worked at Catholic Printing for several years before working for a temp service until going to work for the Seattle Police Department for 11 years as a Data Tech. She loved her job at the police department. Barbara had returned to school and attended Bryman in Burien, Washington before being hired at the Seattle Police Department. Barbara developed a love for playing darts and had joined a club where she excelled at it, winning the U.S. Championship in Las Vegas, Nevada. She also won several trophies in Reno, Nevada and Seattle, Washington. Barbara is survived by her mother, Beverly Jackson, sister Caroline (Ace) Walker, Stephenville, Texas; Devin, Zick, Chandler Zick and Sandra Zick, all of Manson, Washington; her uncle Alan (Deanie) Chandler of East Wenatchee, Washington; cousins, Laurie (Doug) Huber, Marcie and Kristie Pasten, all from Yakima, Washington; Greg (Becky) Savage, Missouri and Theresa Harney of Kansas, Robi (Kelley) Chandler, Scott (Kelley) Chandler, all of East Wenatchee; Carol Taylor (Keith), Christy Cabera and family, nephew Carl Welch and family, Stephenville, Texas. Barbara was preceded in death by her father, Gene, her uncles Dewey Chandler, Yakima, Washington; Lynn Chandler, Entiat, Washington; Hansel (Mary) Jackson, Azle, Texas; George Jackson, Millsap, Texas and her aunt Virginia Savage, Independence, Missouri; nephew Mac Welch, Stephenville, Texas and Eric Savage, Kansas City, Missouri. Our family would like to thank Mary Ann Madison for being Barbara’s close friend while at Blossom Valley. We would also like to thank Blossom Valley staff for watching out for Barb and her cat Boots. Funeral Services will be held on Dec. 18, 2020 at Precht Rose Chapel at 1 p.m. Please leave any thoughts and memories for the family at www.prechtrose.com.

Barbara Jo Jackson, 53, was born on July 27, 1967 in Seattle, Washington, and passed away on Dec. 9, 2020 at Blossom Valley in Wenatchee, Washington, where she had lived since 2018. Barbara attended schools in Manson, Washington and Seattle,... View Obituary & Service Information

The family of Barbara Jackson created this Life Tributes page to make it easy to share your memories.