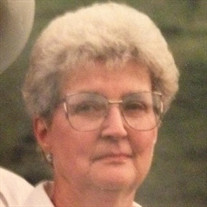 Arlene Miller, 90, passed away March 4th, 2016 at Harmony House in Brewster, WA. She was a long time resident of Okanogan and Leahy Junction, WA. Arlene was born December 11, 1925 in Waconda, WA. She spent her early years in Aneas Valley and Okanogan, WA, where she attended school until the age of 16, when she followed her sister to Kinman Business College. Upon returning to the Okanogan Valley she worked for the Okanogan Medical Bureau and held various positions in the Okanogan County Courthouse. Arlene met Bud Miller while both were employed by the Okanogan Livestock Market. That meeting led to their wedding on October 29, 1950, in Okanogan, WA. Their 58 year marriage started on the ranch at Leahy Junction, and continued there until Bud’s death in 2009, when Arlene moved to Omak, WA. Arlene was an excellent cook, who rarely followed a recipe. On the rare occasion that she used a recipe, she always changed some little thing, and called it hers! No one left the ranch hungry. She could whip up a full meal on little notice, with what she had on hand. Hired hands, cattle buyers, truckers, and salesman always seemed to show up at meal time. Seamstress, crafter, rug braider, gardener, 4-H leader, cake baker, dog lover. All of these are labels that described Arlene. She filled her life and her home with handmade items. Arlene was preceded in death by her husband, Edwin “Bud” Miller; parents James and Ione Turpin; her sister, Evelyn Gann; and her granddaughter, Molly Matsumura. She is survived by her children Allen (Shan) Miller and Gail (Bruce) Matsumura; grandchildren Branden (Amy) Miller, Justin Miller, Britt (Aaron) Burke, Taylor (Danika) Bomar, and Sam Matsumura; great grandchildren Isaiah & Olivia Miller and Lucas Carrick; sister in law Cleo (Zane) Cosby; numerous nieces and nephews; and special family Robert and Kristine Vargas and their children. Funeral services will be Friday, March 11, 2016 at 1:00pm at the Barnes Chapel, 510 W. Indian Avenue, Brewster, WA., followed by a gathering of family and friends at the Brewster American Legion, 102 North Main Street, Brewster, WA. In lieu of flowers donations may be made to Washington Cattlemen’s Association, Endowment Trust Fund, PO Box 96, Ellensburg, WA 98926 or to St Jude Children’s Hospital at www.stjude.org.

Arlene Miller, 90, passed away March 4th, 2016 at Harmony House in Brewster, WA. She was a long time resident of Okanogan and Leahy Junction, WA. Arlene was born December 11, 1925 in Waconda, WA. She spent her early years in Aneas Valley and... View Obituary & Service Information

The family of Arlene Miller created this Life Tributes page to make it easy to share your memories.