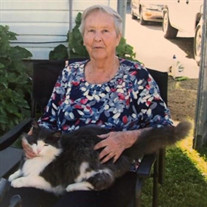 Annabel Weldon of Brewster/Spokane was born in Japton, Arkansas on October 4,1929. She died on March 23,2020 in Spokane, Washington She was 90 years old. She loved her large family and up until the very end she always asked what everyone was doing. Annabel’s parents were Jesse and Willie (Gulledge) Mitchell. She moved to the Okanogan Valley with her mom and step dad Elijah Combs in the 1940’s. Graduating from Tonasket High School in 1948 she was the oldest of seven children who would graduate from that high school. In 1949 she moved to Brewster and married Roy D. Weldon where their four daughters were born and raised. She is survived by her daughters and their families. Marsha and Eric Hanson of Guemes Island, Melinda and Al Good of Edmonds, Margie Freels and Darin Harris of Brewster, and Marie and Bill Casto of Spokane. She has seven grandchildren and nine great grandchildren; Jacob Hanson (Kym) and Max, June and Tatum Annabel of Olympia, Samuel Hanson (Louise) and Anneke and Drew of Snohomish, Nic Hanson (Jennie) and Greyson of Normandy Park, Jesse Freels (Tammy) and Jada, Jillian and Claire of Mansfield, Doug Freels (Oregon), Alexis Good of Little Rock, Arkansas, Amanda Good of Edmonds. Madi Casto of Spokane. One of her special people and like a son was her nephew Michael Dowell of Wenatchee. (He was/is perfect in her eyes.) Annabel is also survived by her brother and sisters; Donnie (Doc) Combs of Tonasket, Sharon Roylance of Pasco, Shirley Will of Loomis, Cheryl Peterson of Omak. A special cousin and her husband, Sheila and Gordon Horner of Omak, also survive her. She also had a special place in her heart for all of her nieces and nephews. Annabel loved her work in the apple industry and worked many years for her dear friend Jack Groenveld. In later years she was known for her “pie maker extraordinaire” skills when she made pies for her daughter Margie’s restaurant, Lindsey’s Drive In in Brewster. People always brought her fruit in hopes she would make them a pie. She was proud to be a democrat and until the very end supported and loved her democratic candidates. In the 1960’s she was the President of the Brewster Chapter of the Democratic Women’s’ Club. She worked hard to support her people. Annabel was a member of the Brewster Assembly of God Church and loved the people of the church. She enjoyed Sunday services and the people who attended. She was preceded in death by her husband, Roy Weldon, her mom and dad, and brothers Elijah and Kenneth (Wayne) Combs and her dear sister Faye Lorz. There will be no services at this time due to the Coronavirus but we will have a celebration of her life in the Spring or Summer when things get less crazy!

Annabel Weldon of Brewster/Spokane was born in Japton, Arkansas on October 4,1929. She died on March 23,2020 in Spokane, Washington She was 90 years old. She loved her large family and up until the very end she always asked what everyone... View Obituary & Service Information

The family of Annabel Weldon created this Life Tributes page to make it easy to share your memories.