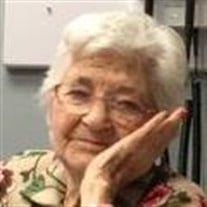 Anna Marie Mauk, born in Ashdown, AR, January 24, 1922, passed away peacefully at the Harmony House in Brewster, WA, with a caring nurse by her side, early Saturday morning, November 21, 2015. She had been living at her home in Brewster, WA up until ten days before her call home to the Lord. She lived much of her childhood in Houston, TX, with her brother, Ernest Jr, and sister, Juanita, where her father was a cook in a diner feeding the oil field workers. He died at the young age of 32 from appendicitis. Her mother went on to marry Harry Schermerhorn, who raised her and was a great father to her. In 1938, she married Sherrill Lee Tomlin and had a daughter, Melinda and son, Sherrill Jr (Butch,Tom). They moved to California in 1942, where Sherrill was stationed at Norton Air Force Base. They divorced and in June 1950, she married Ernest "Biff" Mauk and they had three sons. They moved to Ephrata, WA in 1954, where Biff worked with his brother, Jim, as an electrician. Then, in 1964, they packed the family and moved back to California to Blue Jay, where he worked again with his other brother, Don, running the Mauk’s Riding Stables by Lake Arrowhead. Marie took in ironing clothes for people and some famous people like Harry Von Zell, Jack Benny’s sidekick/announcer. In 1967, the family moved back to Brewster, WA where Biff again worked as a Union Electrician. They bought a ranch in Carlton, WA in 1968 and moved the family there; where they raised Registered Quarter Horses and she went to work at Sun Mountain Lodge, when it first opened and was the Head Housekeeper until the early 1970’s, when she retired and moved to Grand Coulee, WA, where Biff worked on the Dam and after work, she would have a picnic lunch ready and they went fishing on the river every chance they got. They soon moved back to Brewster, WA, and lived and fished and mom made crafts and opened Marie’s Gift Shoppe, where she made all kinds of crafty things, like wind socks, baby and doll clothes, handbags and custom greeting cards with bird feathers, dog coats (with fur collars), and took them to local stores and to the farmers markets to sell. After Biff passed away in 2004, her son, Mike, moved in with her and they fished the Columbia River in Brewster, WA, every chance they could during the summer King Salmon season. She loved to catch the big fish and if she had to let one go, she did not like it at all. She did not take well to the catch and release idea. When she caught a fish it was to bring home and eat! Mike always said a fishing trip without mom was usually just a boat ride, as she usually always caught fish. They started MAUK FISHING STUFF, selling mostly online, where they make lure covers for the tackle they were using so they could leave the poles ready to bait and go fishing when they hit the water. Marie was never idle and loved quilting, knitting and crocheting and gardening. When she lived on the “Ranch” in Soap Lake, WA, she would get up mornings before the kids and go out and shoot groundhogs; they said it was because they were destroying the alfalfa fields, but we believe it was for the fun of it and was she a great shot! Mike bought a pool table and she loved playing that as well as geocaching, always taking the little matchbox cars and bringing them home. Also, she was a rock collector; there was never a small odd size rock that was safe if she spied it in her travels. Marie was preceded in death by her parents, Ernest O. Cooper, Molly (Southerland) Cooper Schermerhorn; husbands, Sherrill Lee Tomlin, Ernest Buford Mauk; sister, Juanita Jordan and brother, Ernest O. Cooper; son, Harry Lawrence "Larry" Mauk, and grandson, Mike Green. She is survived by daughter, Melinda Farmer, Ephrata, WA; sons, Tom (Vicki) Tomlin of Roy, WA, Ernest (Marilyn) Mauk Jr, Malaga, WA and Michael Mauk, Brewster, WA; 17 grandchildren, 27 great grandchildren and five great-great grandchildren. The Memorial Service will be at the Quincy Baptist Church, Quincy, WA on December 5, 2015 at 12:00 p.m. Memorials can be made to the Charity of your choice. Arrangements by Barnes Chapel, Brewster, WA. Leave your thoughts and memories for the family at www.barneschapel.com.

Anna Marie Mauk, born in Ashdown, AR, January 24, 1922, passed away peacefully at the Harmony House in Brewster, WA, with a caring nurse by her side, early Saturday morning, November 21, 2015. She had been living at her home in Brewster, WA... View Obituary & Service Information

The family of Anna Marie Mauk created this Life Tributes page to make it easy to share your memories.